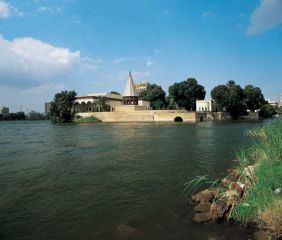 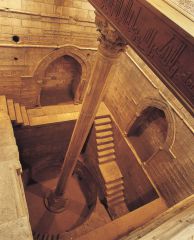 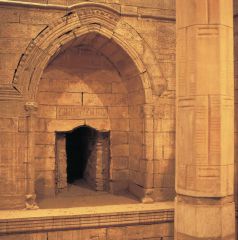 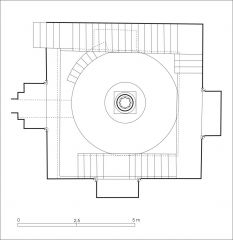 The Nilometer (Kiosk of the Nile; known in Arabic as al-Miqyas) is considered among the enduring architectural foundations tied to the Egyptian culture and way of life. It is in fact unique in the Islamic world. Its importance goes back to a time when measuring the rise of the waters of the Nile was closely related to the levying of taxes on agricultural lands. Taxes were levied only when the waters of the Nile had risen to a certain designated level, which would irrigate the land during flood season.
The Nilometer itself is the equivalent of a well whose walls are built from skilfully hewn stone blocks. The thickness of the walls increases the greater the depth. The well consists of three levels: the lowest level is a circular base, while the middle level is a square whose sides measure more than the diameter of the level below. The highest level is also square in shape, and bigger than the middle level. It is due to this design that the walls can bear the horizontal pressure of the earth that increases the greater the depth.
The waters of the Nile would flow into the well by means of three tunnels, which discharged their waters into the well by means of three 'mouths' on the eastern side that are in the form of subterranean entrances in the wall. These openings are oriented towards pointed arches supported by compact decorated columns with globular bases. These arches are considered to be not only the oldest known examples in Islamic Egypt, but precede the European Gothic type by three centuries. We may also view similar examples on the arches of the Ibn Tulun Mosque in Cairo (AH 265 / AD 879).
A staircase curves around the inside walls of the well and extends all the way to the bottom. Adorning the upper reaches of the well on two sides, the northern and the eastern internal walls, are inscriptions in kufic script, which represent the oldest (dated) Arabic inscription in Egypt ever recorded. In the centre of the well stands the principal component of the monument, an octagonal marble pillar whose length extends to 16 cubits (10.50 m). It is engraved with measurements in cubits (kirat) and inches (zira'), which demarcate the water inundation levels.
Ahmad ibn Tulun (r. AH 254–70 / AD 868–84) carried out restoration of al-Miqyas in AH 259 / AD 873 and replaced the two bands of ancient inscriptions with more contemporary ones on the south and west sides. He placed his name within the new inscription, but kept the original date of construction untouched. Throughout the ages the building has been subject to many restorations and renovations (Fatimid, Mamluk and Ottoman). It was renovated in the modern age in 1925 when the Mamluk dome crowning the outside of the building was replaced by a conical-shaped roof covered by lead panels.

Set on Roda island in the Nile, the Nilometer is a unique structure in Islamic architecture. It gained its importance from being the means for calculating tax levies on agricultural lands according to the size of the Nile flood every year. Its design and the building materials used in its construction helped it to resist corrosion by water for over one thousand years.

Historians concur that al-Miqyas was built in the year 247 / 861 by order of the Abbassid Caliph al-Mutawakkil, although some scholars trace its foundation back to the Caliph al–Ma'mun (r. 169–217 / 786–833). However, the historian Ibn Khalkan (d. 681 / 1282) mentions that the name of the al-Mutawakkil and the year the Nilometer was constructed (247 / 861) was engraved within an inscription on the walls of the well, and that this inscription dated to the foundation of the monument. This inscription has now been lost and may have been removed when Ibn Tulun carried out his restoration of the building in the year 259 / 873. 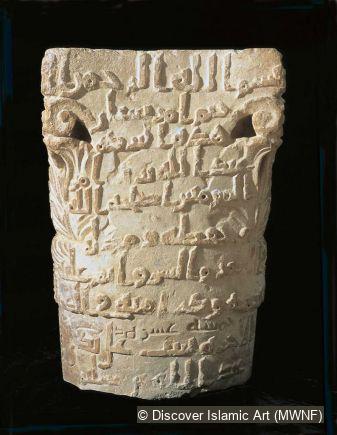 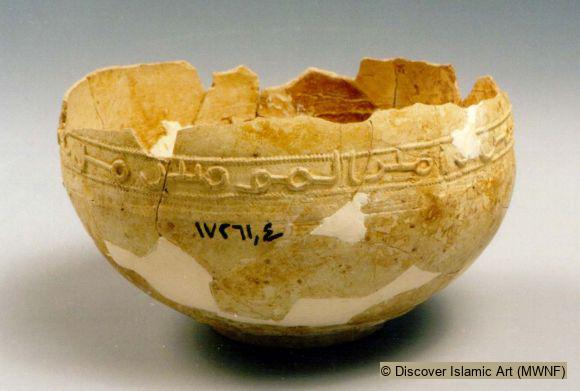 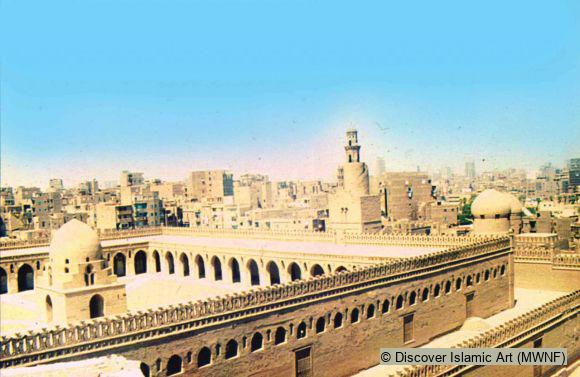