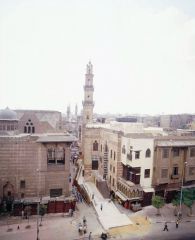 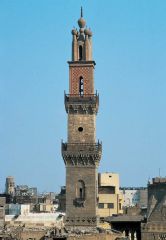 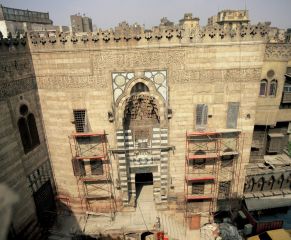 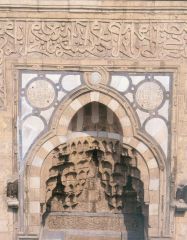 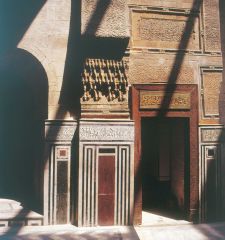 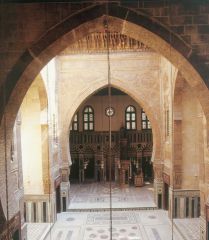 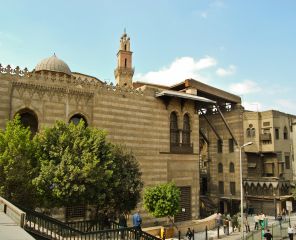 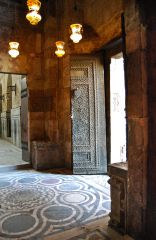 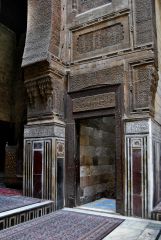 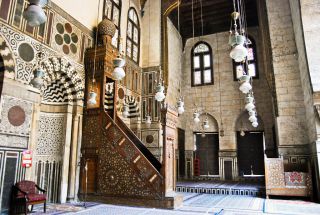 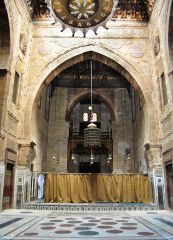 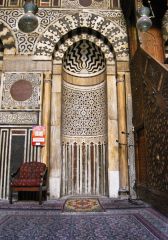 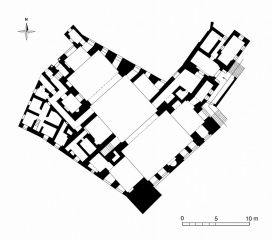 Mosque and Madrasa of Sultan al-Ghuri

The building is located on al-Muizz li Din Allah Street (Ghuriyya). Its eastern façade faces the mausoleum and the sabil that are associated with the same sponsor. The facade of the mausoleum and sabil are in keeping with the mosque and madrasa as regards the length, height and decorations, all of which inspire a beautiful sense of symmetry providing passers-by with a rare artistic atmosphere, Cairo, Egypt

The building is built from stone and its principle, eastern, façade includes an elevated portal, accessed by means of a staircase, and which has shops below it. This mode amongst mosque designs is called a 'suspended mosque'. The entrance consists of a tri-lobed arch, which is adorned with seven tiers of muqarnas with pendentives forming splendid geometric shapes. The entrance also includes the blazon of Sultan al-Ghuri and alternate courses of black-and-white marble panelling in the ablaq style. On the upper reaches of the facade is an inscription-band in naskhi script, which is carved in stone and consists of Qur'anic verses. Likewise, the lintels of the windows are carved with intricate vegetal decoration. Located at the southeastern end and towering over the building is a great square minaret; it has three stories and is built of stone with detailed muqarnas. The minaret is crowned with five bulbous finials, which represent a distinctive and rare design.
The floor-plan of the building follows the cruciform format and consists of a central courtyard surrounded by four iwans, the largest of which is the qibla iwan. The floor of the courtyard as well as the floor in the iwans is decorated with ornamental marble. Above the top of the courtyard walls, is an epigraphic inscription in thuluth script which contains Qur'anic verses and the foundation text. Above this are four tiers of wooden muqarnas. Furthermore, the lower parts of the courtyard and iwan walls are covered with marble revetment up to a height of 2 m, finished with a frieze of white marble on which are carved inscriptions in floriated kufic script filled with black paste. The qibla iwan contains a fine, marble mihrab, and beside it is a wood-panelled minbar inlaid with ivory.
The architect was lavish in the decorative layout of the building, for he did not leave one section without ornamentation. The lintels, arches of the iwans and the soffits of the arches were covered with carved vegetal decoration in stone. The historian Ibn Iyas (who died in around AH 930 / AD 1524) mentioned in his book, Bada'i al-Zuhur fi Waqa'i al-Duhur (Cairo, 1894) that the Ottoman Sultan Salim (AH 918–26 / AD 1512–20) greatly admired this building and describes him as stating: 'This hall is wondrous'. He desired that a building like it be undertaken in the city of Istanbul. The building thus witnessed the implementation of a plan set up by Sultan Salim in the year AH 923 / AD 1517, to transfer Egyptian craftsmen, workers, artisans and builders to Istanbul after the Ottoman Conquest of Egypt. It was in this building that ministers of Sultan Salim congregated summoning master-craftsmen and artisans in order to choose a number of them to travel to Istanbul.

This edifice is notable for its elevated entrance, reached by a flight of stairs with a row of shops beneath. The Sultan celebrated its completion in AH 909 / AD 1503 in the presence of Caliph al-Mustamsik Billah Ya'qub. The building is an architectural masterpiece with a profusion of decorations that befits a palace rather than a mosque. It won the admiration of the Ottoman Sultan Selim I when he invaded Egypt and he gathered craftsmen and artisans in this mosque to choose some of them to travel to Istanbul.

The building was dated based on the inscription bands in the courtyard and the iwans. These include the name of the sponsor, his titles and the date construction was completed. 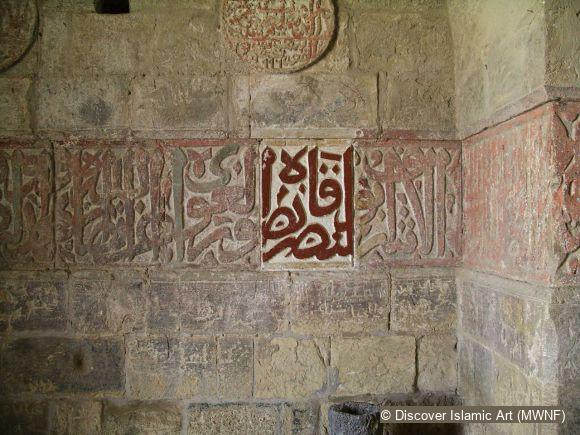