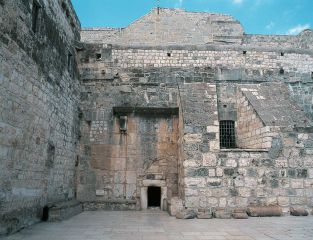 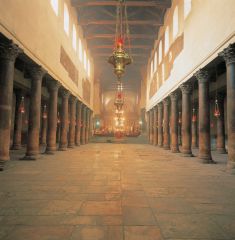 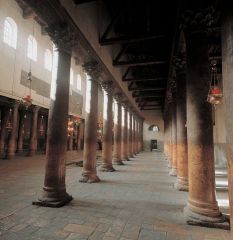 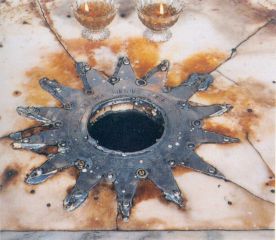 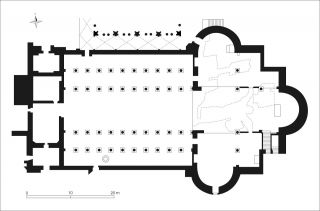 Church of the Nativity

Located in the centre of the old city of Bethlehem, Bethlehem, Palestine*

The origin of the building is a naturally formed cave where Jesus is said to have been born. To immortalise the event the first church was built on this site in AD 31st May, 339. The Church of the Nativity is considered to be one of the most important places to visit on Christian Pilgrimage to the Holy Land. The plan of the original church was a simple octagonal, although nothing remains of it today except a section of the mosaic floor that was incorporated into the floor of the church of Emperor Justinian in AD 529. Despite the occurrence of an earthquake in AH 1250 / AD 1834, and a fire that followed it in AH 1286 / AD 1869, the church preserved its original plan, most of its architectural components and decoration.
The church was not damaged during the Persian invasion of AD 614, and it is said that some of the pictorial elements of the mosaics at the entrance, whose details resemble some elements of Persian art, might relate to the invasion. At the time of the Arab-Islamic Conquest the church was included in the “'Umariyya Treaty”, an agreement that outlined relations between the Muslims and Christians signed by 'Umar Ibn al-Khattab. In AH 560 / AD 1165 and again in AH 564 / AD 1169 the church underwent some renovations and small changes.
The entrance to the church is preceded by a large outside square with the portal at its east end. The entrance is an unassuming door in the wall which would be more in keeping with a fort than with a great church. The door is surmounted by a stone lintel and, being less than 1.5 m high, the visitor must stoop slightly in order to enter the narthex and the church interior. The portal, which dates back to the Mamluk or Ottoman periods, bears remnants from the Crusader period (the pointed arch), and also some remains of the grandiose entrance built during the reign of Justinian (AD 527–65).
A small, low rectangular entrance leads to the narthex. There were originally three entrances in to the church but two of the side entrances were subsequently blocked and the vestibule area was divided up into three sections: today entry to the church is by the vestibule's middle entrance.
The church is designed on a basilican plan of four rows of columns made up of five colonnades, the highest and widest of which is the central colonnade. Each row is characterised by 11 columns, and each of these has a gilded capital in the Corinthian style. On the floor of the central colonnade there are viewing holes where the visitor can see parts of the original floor mosaic dating back to the Constantine period. Near a niche situated east of the colonnades there is a staircase descending to the cave where Jesus is said to have been born. On the cave floor there is a silver star upon which in Latin it is stated: “It was here that Jesus Christ was begotten from the Virgin Mary”.

The church and grotto of the birth-place of Jesus Christ is one of the most important places of Christian pilgrimage in the world. Building began at the site in 339 and it changed a number of times. The construction of the present church was ordered by the Byzantine Emperor Justinian. It is in basilica form and composed of five colonnades, the biggest of which is in the middle. It is crowned by a gabled roof. In the east side, under the altar, is the holy cave, said to be the birth-place of Christ. In the middle of the church are cloisters from different ages and different Christian sects. This site is also sacred to Muslims.

The building was dated with the support of information from primary historical sources, and by the discovery of remains of the mosaic floor from the original church.

Yusuf al-Natsheh "Church of the Nativity" in Discover Islamic Art, Museum With No Frontiers, 2022. 2022. https://islamicart.museumwnf.org/database_item.php?id=monument;ISL;pa;Mon01;23;en 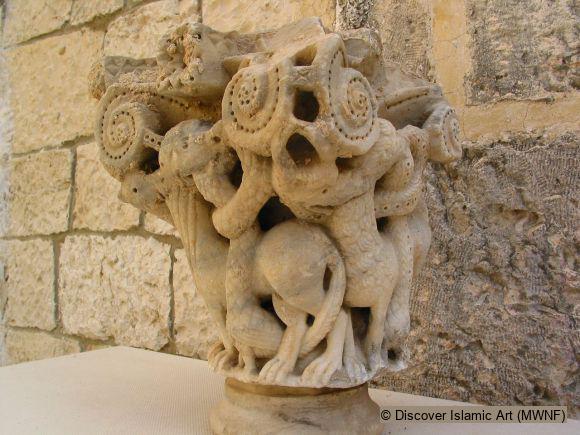 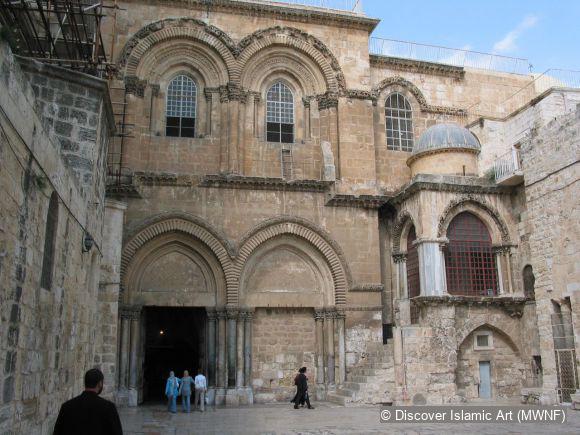