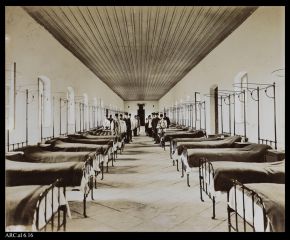 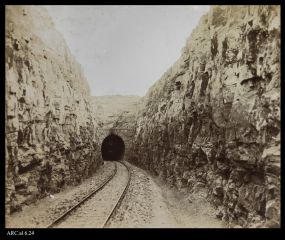 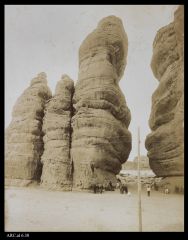 In 1900 the Ottoman Sultan Abdülhamid II (r.1876–1909) began the construction of a railway line connecting Damascus to the holy cities of Medina and Mecca. Built by public subscription and with an appeal to Muslims of the world for financial support, the railway line reached Medina in 1908, but didn't reach Mecca. It was built with the assistance of German engineers who worked closely with Turkish officials. This album of the Hijaz Railway probably belonged to a Turkish engineer who worked on the construction of the line. It has 50 photographs, mostly of stations and sections of the line, but also of the landscape that the line passed through in the area between Tabuk and Mada’in Salih. The photographs were most likely taken by J. H. Halladjian, an Armenian photographer with a studio in Haifa in Palestine active in the 1890s and early 20th century. Based on records at the Imperial War Museum and The Royal Geographical Society, Halladjian took photographs of the Hijaz Railway and places along its route. The album contains some important photographs such as the one of the hospital at Tabuk which was established in 1907 and which became the railway’s quarantine station (ARC.al 6.16) as well as images which demonstrate the hardship of cutting through rock in order to pass the line through mountainous terrain (ARC.al 6.24). Also documented here are the great stone monoliths north of Mada'in Salih (ARC.al 6.38) in Mabrak al Naga, where prior to the Hijaz Railway, the Ottoman government connected the Hijaz to Istanbul via a telegraph line which reached Mada'in Salih in 1900. The building of the overland telegraph line between Damascus and Medina, much like the construction of the Hijaz Railway project to follow, was fraught with complications including the terrain and the danger of Bedouin resistance.

Dating and attribution based on IWM and RGS Collections