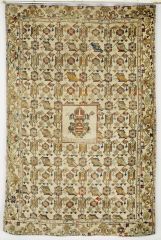 The rectangular rug belongs to the group of so-called 'bird' rugs. These rugs are distinguished by their cream white ground and by their use of mainly warm, earthy hues – yellow, red and brown – contrasted with small areas of blue and greenish-blue. The design of the rug is divided into a central field and a border. The significant motif of the design, which gives it its name, is a shape resembling a stylised double-headed bird, always with four birds arranged around a large blossom forming the repetitive design of the central field. The areas between them are filled with a standardised motif composed of a central rosette and four blossoms on stems. Additional small rosettes and whirling motifs are set between the large blossoms and the birds of the horizontal lines. The framed border has cloud-bands, which are connected to each other by arabesques.
This rug, however, shows a peculiarity which distinguishes it from the usual style of bird rugs. In the middle of the rug is a nearly square field showing a coat of arms and a mitre. The inscription underneath names the person for whom the rug was probably made, Archbishop Johannes Andreas Próchnicki. Próchnicki was Latin archbishop of Lemberg from 1614 until his death in 1633. It is assumed that the Armenians of Lemberg who had close connections with Istanbul helped Próchnicki to obtain this rug. That it was an order is evident from some illegible letters within the inscription. It is also interesting to know that some of the preserved Persian carpets commissioned by an Armenian of Lemberg on behalf of the Polish King Sigismund III in 1601/02 in Kashan also show a middle square including the king's coat of arms.
In 1704 the Swedish King Charles XII (1682–1718) conquered Lemberg. We can assume that the rug was part of the booty of this war. Afterwards, the rug is supposed to have been the property of a noble Swedish family for about 200 years before it was sold to the collectors Axel and Nora Lundgren in 1937.

Rectangular rug from the group of so-called ‘bird’ rugs. The significant motif is a shape resembling a stylised double-headed bird. The unusual field in the middle of this rug contains a coat of arms and a mitre. This rug was probably made for J. A. Próchnicki, archbishop of Lemberg 1614–33.

The inscription in the central field of the rug refers to Johannes Andreas Próchnicki who was archbishop of Lemberg from 24 November 1614 until his death in 1633.

Gift from the estate of Axel and Nora Lundgren, registered in 1977.

So-called bird rugs with cream-white grounds are usually assigned to Ushak in west Turkey. Furthermore, after the fall of Constantinople to the Ottomans in 856 / 1453 there was a brisk trade with the Armenians of Lemberg. The predecessor of Johannes Andreas Próchnicki had bought 20 rugs in Constantinople to embellish the cathedral of Lemberg. 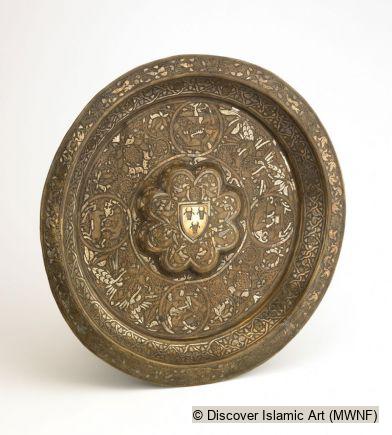