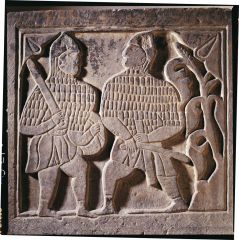 A grey marble slab that is rectangular and nearly square, on which two figures of warriors are carved in high relief. The figures have been depicted within a frame delineated by a deep contour line. Their heads are shown in profile, their bodies from the front; they wear helmets with pointed tops, armour, and short boots. They are shown with one foot forward, as if attacking. The figure on the left has a sword in one hand and a shield in the other. The figure on the right is holding his sword in one hand while grasping the sword's scabbard in the other. Both figures are shown in military dress, and their garments, as well as the details of their bodies, are defined with carved outlines.

The tree with split-palmette leaves on the right-hand side of the slab, as well as the vegetal forms used as fillers in the upper corners, shows the influence of Sassanid on Islamic decorative arts. The warriors' clothes and pointed helmets show similarities with those seen in medieval Crusader painting, offering valuable documentary evidence about military dress and equipment of the period.

Konya was the capital of the Anatolian Seljuq Sultanate during the AH 6th–7th / AD 12th–13th centuries and its citadel was decorated with rich figurative reliefs. This warrior relief not only depicts the military costume and arms of the period but also is an important document for the period.

Konya citadel, where it is thought this object originated, dates to the 6th / 12th century. For this reason the object is dated to the same century.

It is known from several sources (e.g. the journals of the 19th-century French traveller Charles Texier) that the citadel at Konya, capital of the Anatolian Seljuqs, was adorned with figurative decoration in stone. This object is thought to have belonged to the citadel, which does not survive. It is thus probable that it was made in the vicinity of Konya. 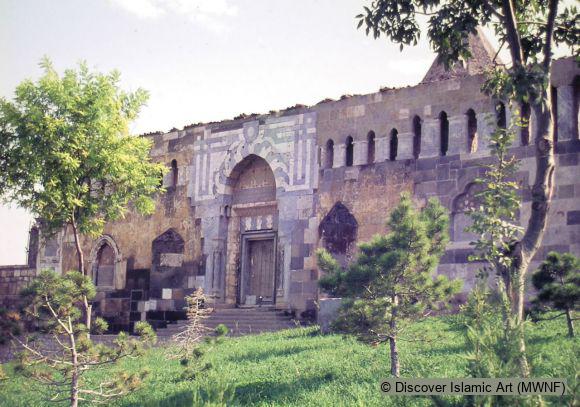 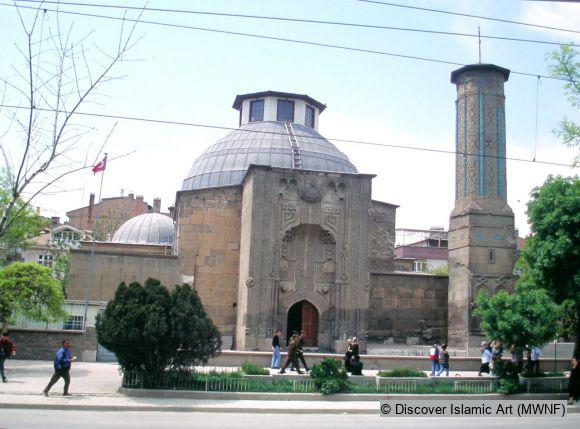