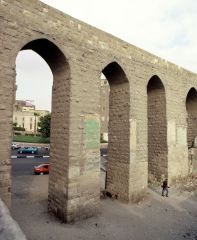 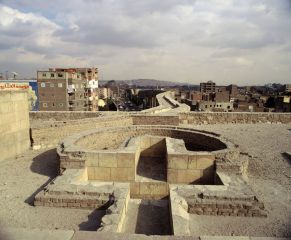 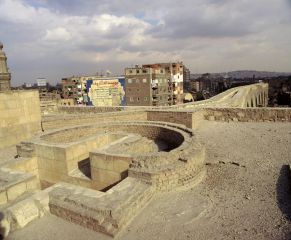 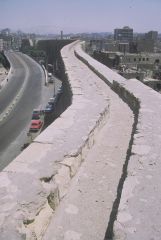 The aqueduct extends from the banks of the Nile in the area of Fum al-Khalij (The mouth of the Gulf), to Sayyida Aisha Square close to the Citadel of Salah al-Din. Today the aqueduct is intersected by some modern roads, Cairo, Egypt

The idea of building an aqueduct to carry water to the Citadel of Salah al-Din, known also as Citadel of the Mountain (Qala'a al-Jabal), goes back to the period of Salah al-Din al-Ayyubi (r. AH 564–89 / AD 1169–93) who erected Cairo's city wall, the beginning of which was close to Fustat. A canal to convey water was constructed on top of the wall; the water being carried up to it by means of a series of waterwheels from one of the wells. The water flowed through the canal to the citadel where it was used for drinking and irrigation of the surrounding fields.
During the Mamluk period the population of the citadel expanded, with many Mamluk citizens residing there and, as their numbers grew, so Sultan al-Nasir Muhammad ibn Qalawun was forced to consider another plan to increase water flow from the River Nile to the citadel.
In AH 712 / AD 1312, al-Nasir Muhammad put into practice his plan and ordered the construction of a great tower to contain four waterwheels in the region of Fum al-Khalij (which is today known as Qasr al-Ayni Street), on the banks of the River Nile. These waterwheels were designed to raise water up to a canal system (an aqueduct) located on top of a series of raised arches that were supported by large stone piers. The structure was designed to form a slope in order that it connected with the aqueduct, which Salah al-Din al-Ayyubi had earlier masterminded. Al-Nasir Muhammad's aim was to provide the citadel with enough water to satisfy the thirst of residents, soldiers and beasts of burden; to irrigate the surrounding fields and to expand his planned construction works within the citadel, which included the Qasr al-Ablaq and the Mosque of al-Nasir Muhammad ibn Qalawun.
Sultan Qaytbay (r. AH 872–901 / AD 1468–96) undertook major renovation works to the aqueduct in AH 885 / AD 1480. In AH 912 / AD 1506, Sultan Qansuh al-Ghuri further restored some parts of the aqueduct, as well as renovating the waterwheel tower, at which time he placed his emblem on the tower. Al-Ghuri brought the water system up to date; the water now pooled in the square at the foot of the citadel, before being raised by waterwheels to water cisterns inside. The aqueduct was functional until the Ottoman period (AH 13th / AD 19th century). It fell into disuse during the French expedition against Egypt under the leadership of Napoleon Bonaparte (AH 1213–16 / AD 1798–1801), when French soldiers transformed some parts of the aqueduct into a fort by blocking up some of the arches and turning them into fortifications.
The length of the remaining section of the aqueduct is about 3 km. It is considered to be one of the most beautiful examples of aqueduct architecture not only in Egypt but also in the entire Islamic world. In 2005 the High Council of Antiquities undertook the implementation of a plan to restore the waterwheel tower and the aqueduct walls.

The greatest project designed to provide the Cairo Citadel with drinking water, the huge stone aqueduct extends about 3 km from the banks of the Nile towards the Citadel. Water was hauled up by four great waterwheels and poured into sedimentation cisterns. The cisterns were then opened so that the water flowed in a canal on the top of the aqueduct to the Citadel.

Dating of the aqueduct is supported by allusions made to its construction by al-Maqrizi in his book (see below), where he suggests that the aqueduct was built in 712 / 1312 during the reign of Sultan al-Nasir Muhammad ibn Qalawun. Furthermore, there is a blazon on top of the waterwheel-tower that is specific to Sultan Qansuh al-Ghuri, which may well indicate that he undertook restoration work on the aqueduct during his reign. 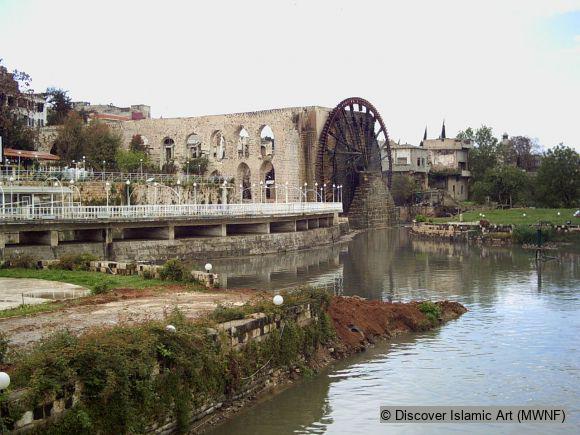 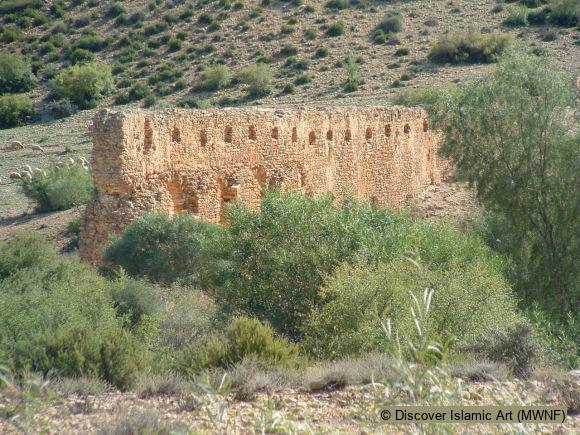 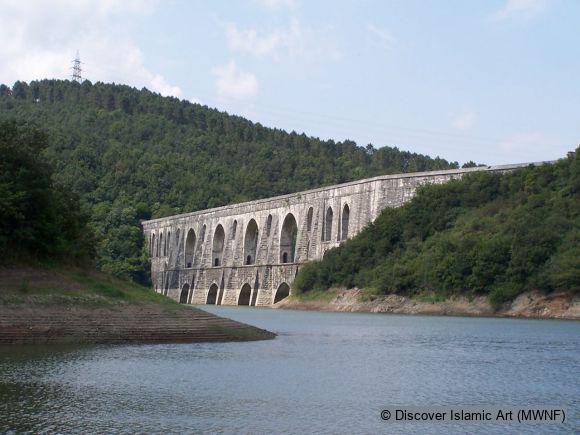