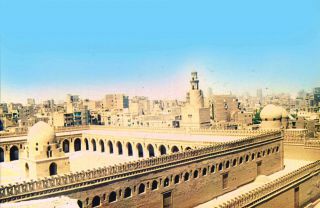 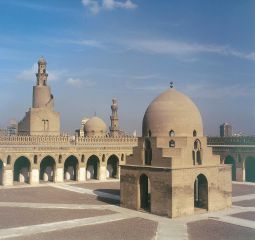 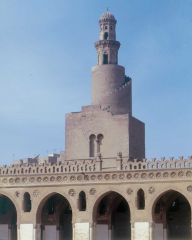 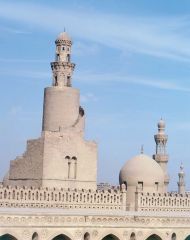 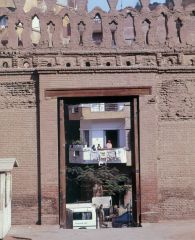 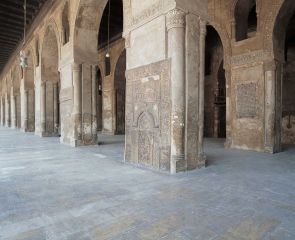 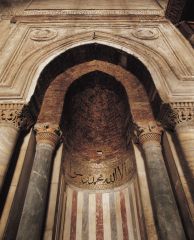 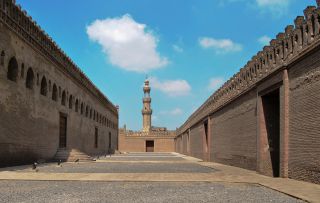 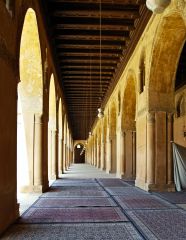 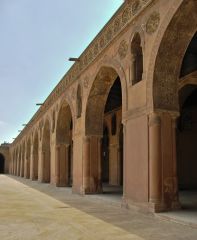 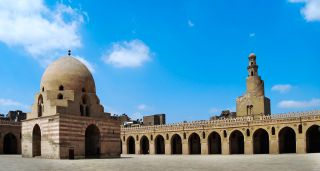 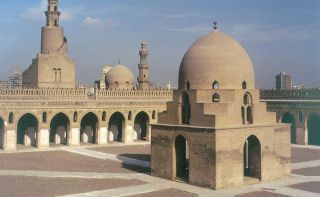 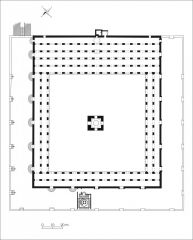 The mosque is located in a slightly elevated region of the Sayyida Zaynab district, in al-Khudairi Street, Cairo, Egypt

The Mosque of Ibn Tulun, is considered the second oldest mosque extant in Egypt. It is the only remaining monument in the City of Qata'i', established in AH 256 / AD 870 as the capital of the Tulunid state in Egypt. The floor plan of the mosque assumes the form of a square, measuring approximately 26,318 sq m. Its architectural layout adheres to the traditional plan for the congregational mosques in the region consisting of an open, square central courtyard measuring approximately 92 m sq. In the middle of the courtyard is an ablutions fountain, an innovation of the Mamluk sultan, Hosam al-Din Lajin (r. AH 696–8 / AD 1297–9) in AH 696 / AD 1296. Four porticoes surround the courtyard, the largest is the eastern portico (that of the qibla) consisting of five arcades. As for the other three porticoes, each of them consists of two arcades. On the north, west and south sides, a large wall surrounds the mosque. Between these walls and the walls of the building is an open area called the ziyada, an example of which may also be seen in the Great Mosque of Samarra in Iraq (built AH 237 / AD 850), and in the Great Mosque of Susa in Tunisia (built AH 236 / AD 851). The Congregational Mosque of Ibn Tulun is considered to be one of the biggest mosques in Egypt whose entire surface area including the ziyada exceeds 26,318 sq m, and which is made of fired brick.
The exterior façades of the building are crowned by crenellations composed of unique forms known as 'arais which resemble human abstract shapes or paper dolls. The upper half of the building façades are pierced with a row of windows with pointed arches. Placed in their corners are compact columns, which resemble their counterparts in the Nilometer (built AH 247 / AD 861) in Cairo. There are 19 simple rectangular doors on the mosque walls. The eastern portico of the mosque is the most decorative and contains mihrabs from the Tulunid, Fatimid and Mamluk periods. The arcade arches are supported by piers built from red brick, in the corners of which are colonnettes, a style that had appeared before in the Great Mosque of Samarra. Beautiful stucco decoration adorns the edges of the arches, their soffits, and along the soffits of the window arches, and is composed of intersecting lines within which are a variety of leafy decorations. The mosque, in fact, contains the oldest and richest collection of stucco decoration in Egypt, which reflects a strong relationship with the decorative styles of the Great Mosque of Samarra in Iraq (the capital of the Abbasid state during AH 221–79 / AD 836–92).
The upper part of the mosque walls has 128 pierced-stucco arched windows with geometric and interwoven vegetal decorations which resemble those found in the Umayyad Great Mosque in Damascus (built in AH 96 / AD 714), executed in marble. Studies have indicated that only four of the arched windows date back to the period of Ibn Tulun for they consist of decorative motifs that are specific to that period, namely intersecting circles. As for the rest, they are attributed to the Fatimid and Mamluk periods. This collection of stucco windows is considered one of the most exquisite characteristics of the building, since each window differs from the other in the layout of its decorative motifs. Furthermore, this is the first example of its kind in Egypt.
The influence of the Great Mosque of Samarra is manifest in the minaret, built in the western ziyada, seen most obviously in the fact that the staircase winds itself around the outside body of the minaret and not within the interior, as is typical of most mosques in the Islamic world. This is a design layout which is identical to the minaret of the Great Mosque of Samarra, known for its spiral form.
The innovations and additions to the mosque by Sultan Hosam al-Din Lajin in AH 696 / AD 1297 are considered the most important and extensive to be carried out in the mosque. The mosque was transformed in AH 1263 / AD 1847 into a refuge for the handicapped and the elderly but during the period 1890–1918, it was restored and the modern structures were removed. The High Council for Antiquities is presently (2005) undertaking a complete restoration of the complex.

This is the only existing monument from the city of Qata'i, the third Islamic capital of Egypt. It is marked by its spiral minaret, influenced by that of the Great Mosque of Samarra. The architect resorted to building brick piers to support its arches instead of marble columns taken from old buildings, as was the practice at the time. Among its prominent features are 128 pierced-stucco windows on its upper walls, each with a different decorative design.

Dating of the building is based on a foundation plaque fixed to one of the piers of the qibla area, which was carved in simple kufic script with the name of the builder (sponsor) of the mosque and the date of its construction. 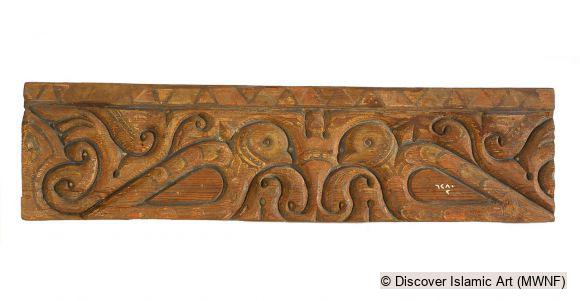 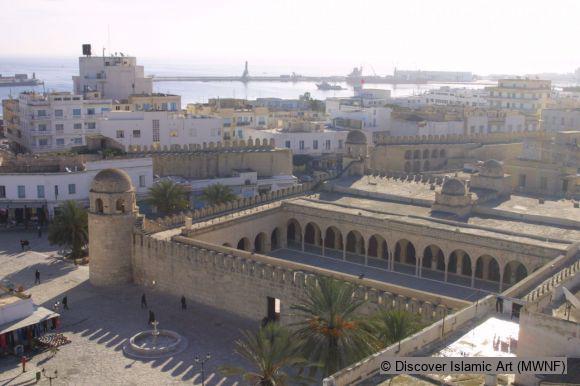