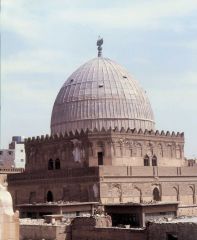 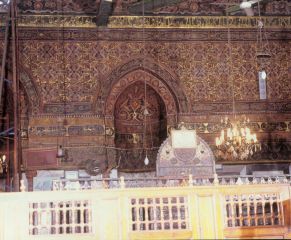 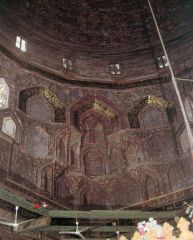 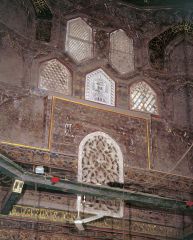 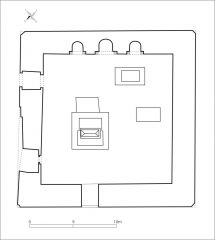 The mausoleum was erected for Muhammad ibn Idris ibn al-'Abbas ibn 'Uthman ibn Shafi'i, known by the name of Imam Shafi'i. Shafi'i was born in Gaza in AH 150 / AD 767, he grew up in Mecca and studied under Imam Malik, who was the founder of the Maliki School in Suni'i fiqh (jurisprudence). Shafi'i then founded his own independent school of law (Shafi'i) and travelled to Egypt in AH 198 / AD 813, holding classes in the Amr ibn al-'As Mosque from where a number of distinguished Egyptian scholars emerged. He died in AH 204 / AD 819 and was buried in the same tomb as the children of Ibn 'Abd al-Hakam, in al-Qarafa al-Sughra.
Salah al-Din al-Ayyubi undertook construction of the grave of al-Shafi'i in AH 572 / AD 1176. This was the first building to be erected on the grave of al-Shafi'i. In AH 574 / AD 1178, the work on the wooden cenotaph, which was placed above the tomb was completed. This is decorated with panels of geometric ornamentation carved with extraordinary skill. Qur'anic verses and accounts of the life of the Imam are written on it, as well as the name of the craftsman, 'Ubayd al-Najjar, in kufic and in Ayyubid naskhi script.
In AH 608 / AD 1211, the mother of al-Malik al-Kamil ibn al-'Adil died and was buried in the tomb of al-Shafi'i, and her son erected a dome to cover the tomb. A large part of the mausoleum, which was built by al-Kamil, still stands. As for the present wooden dome, the muqarnas and the marble decorations, they are renovations, which the Mamluk sultan, Qaytbay (r. AH 872–901 / AD 1468–96) undertook in AH 885 / AD 1480. The Mamluk sultan, Qansuh al-Ghuri (r. AH 906–22 / AD 1501–16) also renovated the mausoleum, and in AH 1186 / AD 1772, the Ottoman governor, Ali Bek al-Kabir undertook the restorations of the wooden dome of the mausoleum in addition to the polychrome decorative carvings, which covered the interior walls, the muqarnas and the dome.
The mausoleum occupies a square whose sides measure 15 m. The walls are 2.75 m thick. It is close to 20 m in height from the ground. The lower walls are built of stone and the remaining upper part from brick. The southern wall of the mausoleum consists of three mihrabs, the biggest one of which is in the centre. They are lined with polychrome marble frames and their peaks are adorned with wooden carvings. Sultan Qaytbay added a fourth mihrab in the eastern corner of the same wall to correct the direction of the qibla. The dome which covers the mausoleum is a grandiose one, which is considered one of the most beautiful in Egypt. It towers over the floor of the mausoleum at a height of about 27 m. At the four corners of the square ceiling are three rows of muqarnas squinches, which form a transitional zone from the square to the dome drum. The muqarnas is made from wood and is decorated with inscriptions in naskhi script. The muqarnas squinches are flanked by windows with stucco interlaced work which are fitted with coloured glass. The dome is composed of two layers: the inner wooden layer, and the outer layer which is covered with lead and which was renovated to this form by Sultan Qaytbay. In the middle of the mausoleum is the cenotaph which was placed on the grave of Imam Shafi'i as well as the tomb of al-Malik al-Kamil's mother.
The outer façades of the mausoleum consist of three storeys of which the dome forms the highest. Fixed on the pinnacle of the dome is a small copper boat. An original part of the building, the reason for its presence has been the subject of debate. Many different reasons for its presence have been suggested, some believe that it is there to hold water and grain for pigeons, while others are of the opinion that perhaps it is a symbol for the learning of Imam Shafi'i, considering him as a sea of knowledge.
The middle storey recedes inwards by approximately 70 cm from the lower level. Its façade is decorated with a row of arched recesses in the form of fluted shell niches which resemble the decorations on the façades of the Madrasa of al-Salih Najm al-Din Ayyubi and that of al-Aqmar Mosque in Cairo. Between the arched recesses are circular and polygonal decorative forms, topped by a frieze of geometric decoration that is crowned with serrated crenellations decorated on their outer surface. Each of the four sides of the facade on the lowest storey is set with a window flanked by an arched niche.

Imam Shafi'i was the founder of the fourth Sunni school of jurisprudence. He held classes in Amr ibn al-‘As Mosque in Egypt in the AH 2nd / AD 8th century and was buried in the Small Cemetery in Cairo. Salah al-Din (Saladin) built a tomb for him some 300 years later with a wooden cenotaph above it decorated with fine geometric ornamentation. The wooden dome of the mausoleum is one of the largest and most beautiful in Egypt. A small copper boat is fixed to its pinnacle, which some say was filled with grain and water for pigeons, while others say it is a symbol of his learning, considering him a sea of knowledge.

This building was dated based on a foundation inscription on top of the wooden lintel of the western window of the dome, which includes the name of the monument's founder/sponsor and the date of its construction. 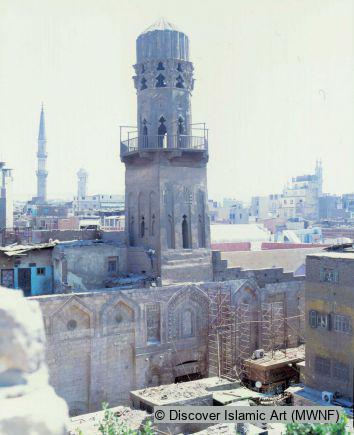 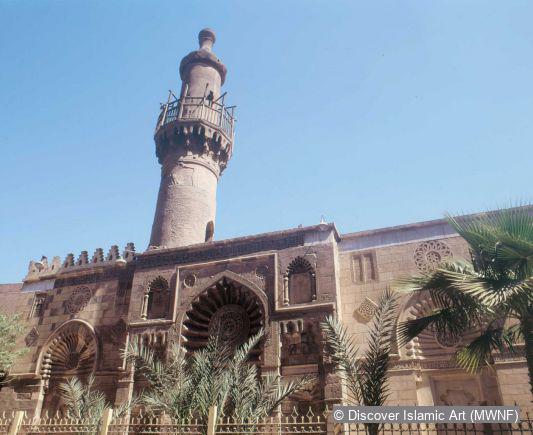