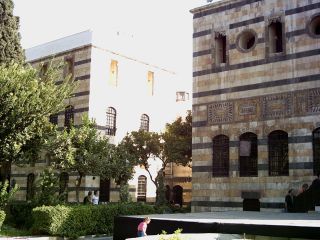 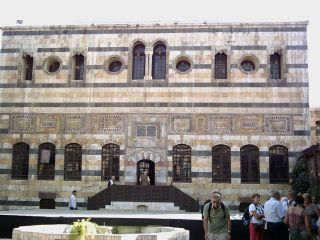 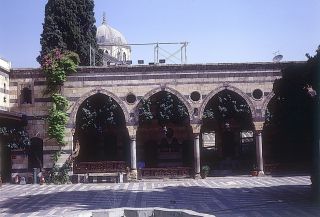 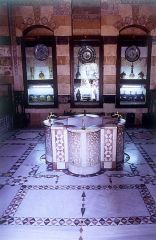 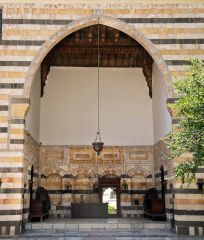 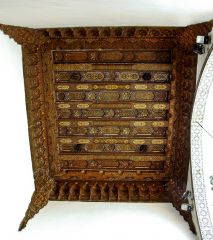 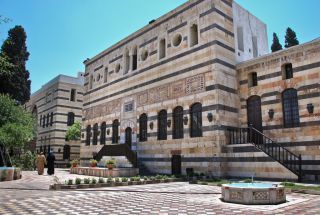 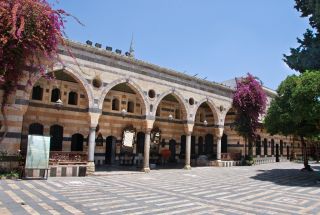 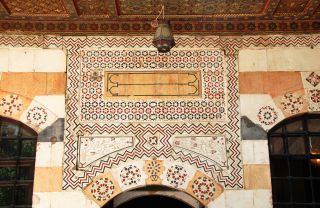 Qasr al-Azm, the largest and oldest completely preserved private residence in Damascus, covers a space of about 5,500 sq m. It is a typical example of Damascene domestic architecture, with its simple outer appearance and its splendid interior furnishings. The division of the apartments according to official space and private space is also typical of Muslim domestic architecture in general, a feature not seen in their Christian or Jewish counterparts.
From the entrance with a guard's room to its left, a long, winding cross-vaulted corridor leads into the madafa (“chamber of the coffee-server”), before entering the official apartments (salamlik). The Salamlik is arranged around a small courtyard with an iwan on the south wall, flanked by two reception rooms. There are also guest rooms and a small kitchen for catering. From this area there is access to the most splendid area of the building, the haramlik, where the family functioned and the women and children stayed. The rooms in this area are arranged around a spacious courtyard measuring 56 m x 24 m, with two fountains and a garden at the centre. The chambers on the north side of the courtyard served as living rooms in the winter. They are provided with a portico (riwaq) supported by antique-basalt columns brought in from Dar'a and Bosra. Opposite the riwaq there is the magnificent tripartite reception hall (qa'a) with splendid stone-paste decoration, and small gardens to the north and east sides. At the southeast side the iwan faces the large rectangular fountain. The bathhouse or hamam, an unusual feature in private houses, is adjoined. There is also a kitchen section, similarly arranged around a courtyard, and remises for the vehicles and horses.
The use of high-quality materials for the palace interior can be seen by the basalt from Hauran, limestone from Mezze, Zabadani and Aleppo, and marble that was probably imported from Italy. Elaborately painted wooden panels decorated the walls and ceilings of the reception rooms. In 1830 the building was renovated and furnished with trompe l'oeil paintings according to the fashion of the time.
The construction of As'ad Pasha al-Azm's residence required two years and over 800 workmen for completion. The 18th-century chronicler, al-Budairi, reports the consequent scarcity of workmen and construction materials at the time, and that the city's water supply was interrupted in order to be divert it to the palace.
Excavations in the 1920s revealed the probability that the palace was built on a site of former importance, such as the residence of the Mamluk Governor Tankiz (AH 712–29 / AD 1312–27). The spiritual and socio-political prestige of the location comes from its proximity to the Umayyad Mosque. With new Ottoman caravanserais constructed to the south, the political and commercial power of the Azm family is further attested as As'ad Pasha built the largest and most splendid caravanserai in the city in AH 1171 / AD 1757, still known as Khan As'ad Pasha.

This is the largest completely preserved private house in Damascus. It occupies more than 5,500 sq m. In typical Damascene domestic architectural style, the outer appearance is simple but the interior is splendid. It includes an official or formal 'male' space and a private or familial 'female' space, each provided with a courtyard of flower gardens, fountains and reception rooms decorated with ablaq masonry, stone paste patterns and painted wooden panels. This palace, prestigiously located in the religious and commercial heart of the city, was the residence of the Damascene Governor Asad Pasha al-Azm.

The 18th-century Damascene chronicler, Ahmad Budairi al-Hallaq reports for the year 1163 (1750) that construction work on the palace commences. 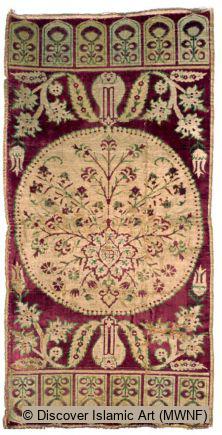 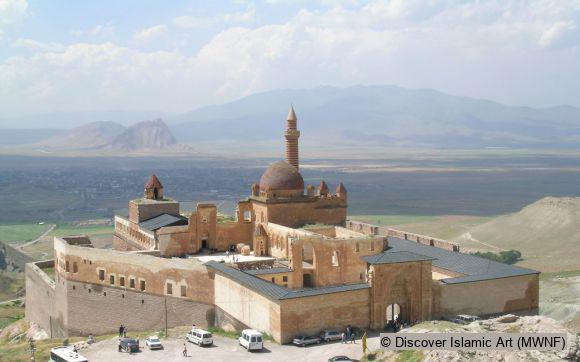 The Ottomans | Art outside the Capital