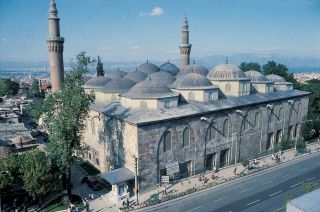 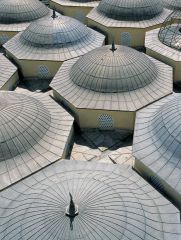 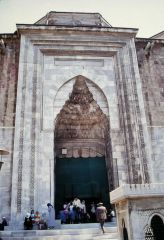 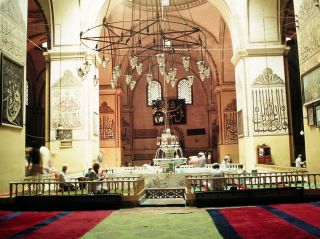 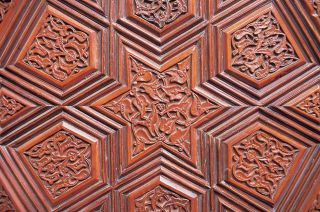 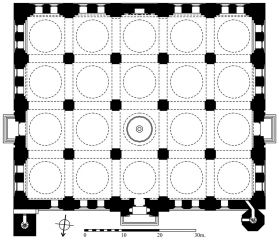 According to tradition, when the Qaramanid ruler Mehmed Bey besieged Bursa in AH 806 / AD 1412, he piled up firewood around the mosque and tried to burn it down, causing great damage to the cut stone covering the walls. The walls were plastered over to hide the damage, and in 1951–9 the plaster was removed and the wall coverings refurbished.
The mosque is built on a rectangular area oriented east to west and measuring about 55 m x 69 m. There are portals on the east, west and north walls of the mosque, the most splendid of which is the north portal. Each of the walls has two rows of windows. The tympana of the rectangular windows in the bottom row are all of a different design. The east and west corners of the north wall each have a minaret. The minaret adjoining the building in the west corner stands on an octagonal base and has two entrances; one accessed from inside the building and one from the outside, it also has two staircases. Each staircase ascends to the gallery, but the outside staircase also leads to the roof. This minaret has an inscription stating that it was built by Sultan Bayezid I. The minaret in the east corner does not adjoin the building. Its socle is within the stable of the neighbouring Emir Han, suggesting that the minaret was not built at the same time as the mosque.
The prayer hall is divided into 20 bays of equal size by 12 cruciform piers and arches adjoining the walls; each bay is covered by a dome. One of the domes situated in the bays along the axis formed by the north portal and the mihrab is open to the sky; beneath it is a fountain. Despite the fact that there are two rows of windows and that the drums of the domes have openings to let in light, very little natural daylight enters the prayer hall.
The mihrab is in the middle of the qibla wall. The niche is rectangular and its conch is decorated with muqarnas. The decoration of the mihrab was finished on 15 Shawwal 979 / 2 March 1572 by a master named Mehmed and it was commissioned by one, Zeynî Chelebi. The painted and gilded mihrab decoration was executed in AH 1322 / AD 1905.
The decorative woodwork of the minbar, executed in the kündekâri technique, is reminiscent of the arts of the Anatolian Seljuq period. The sides of the minbar feature floral designs carved within geometric motifs, formed between strips of wood. The inscription on the minbar indicates that it was made by Hacı Mehmed of Antep, son of Abdülaziz, in AH 802 / AD 1400, in the period of Sultan Bayezid I.
The preacher's lectern, carved from a single piece of marble, was made in AH 1231 / AD 1816, while the müezzin mahfili (loge for the chanters) on eight wooden columns was made in AH 956 / AD 1549.
The mosque's decoration is found on the north portal, the mihrab, the minbar, and the walls of the prayer hall. The decoration on the north portal and the mihrab consists of carved floral and geometric motifs. The mostly calligraphic decoration on the walls of the prayer hall was made between AH 1192–1357 / AD 1778–1938.

The Great Mosque has the largest prayer hall of all the mosques in Bursa. The lateral rectangular prayer hall is covered with 20 domes of equal size. Its minbar of walnut wood was made in the kündekâri technique, employing no nails or glue, and it is one of the most important examples of woodwork from the Early Ottoman period.

Yekta Demiralp is an assistant professor in the Department of Archaeology and History of Art, Faculty of Letters, Ege University, Izmir. He was born in Soğucak, Balıkesir, Turkey in 1959. He graduated from Ankara University, Faculty of Linguistics, History and Geography, Department of Art History in 1980. He worked as a teacher of history of art and then joined the Department of Archaeology and History of Art, Ege University, as an expert. He became a research assistant in the same department in 1988 and an assistant professor in 1997. He participates in Beçin excavations and has published on the history of Turkish architecture and art.
Translation by: Barry WoodBarry Wood 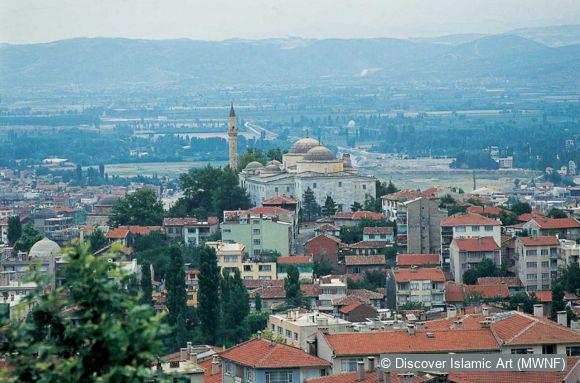