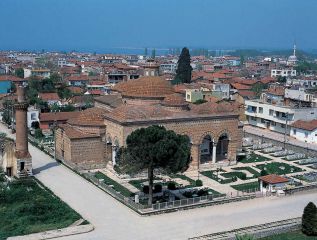 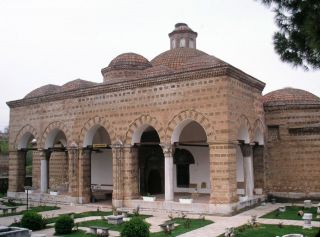 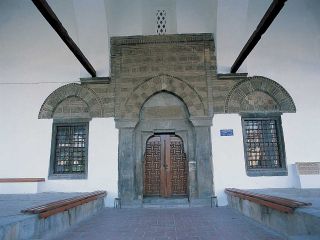 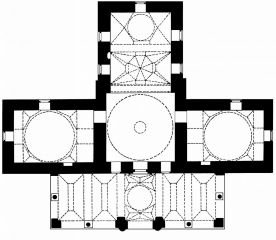 The monument was built in the style of a mosque with tabhane (guest-rooms) (also known as mosques with zawiya, or multifunctional mosques), many of which were built in Anatolia in the AH 8th–9th / AD 14th–15th centuries. It consists of a rectangular area with two rooms (the prayer hall and the central courtyard) flanked by a room on the north and south sides; there is also a portico for latecomers extending along the eastern side. The eastern façade is 40.50 m wide; the portico for latecomers 25.35 m wide. Inclusive of the portico for latecomers the building is 33.60 m in length.
The portico for latecomers has five bays supported with four piers. Four columns join two pointed arches on each of the sides, and five pointed arches on the front. Contrary to custom, the portico for latecomers does not extend the length of the entrance façade. It has a dome over its central bay and vaults over the others. In the centre of the west wall is an entranceway to the central hall; above which is the building's foundation inscription on marble.
The central hall is square and covered by a dome with a round lantern. The prayer hall to its west is divided in two by an arch. The eastern half has an eight-section dome, while the dome in the western half has been placed between cross- and star-vaults. The mihrab niche is in the south wall. The rectangular rooms to the north and south of the central hall have been transformed into squares using flat-top (Bursa-type) arches, and they are each covered with a dome supported on a transition zone of broken triangles. The east wall of each room has a hearth-niche.
The building is covered with red roof tiles. Its walls are made of single rows of cut stone alternating with triple rows of brick. The upper parts of the walls feature four rows of brick dog-tooth eaves, while the domes have two rows of dog-tooth eaves.
In the portico for latecomers the capitals of the columns are of marble, so also are the frame and lintel of the entrance door, the tympanum and the side piers. The walls have some decorative brick- and stonework. The piers with torus-mouldings on the entrance axis are noteworthy for their different decoration. Decorative plasterwork with friezes of palmette motifs in relief, embellish the dome in the centre of the portico for latecomers and the upper part of the walls of the entrance area.
Several functions have been proposed for the Nilüfer Hatun Imaret. Some researchers claim that the building was a soup-kitchen, since the name imaret means an institution for distributing food to the poor. Others hold that the term imaret did not come to have this meaning until later and that, initially, the term was used for any building used for charitable deeds, and that in the AH 8th–9th / AD 14th–15th centuries buildings like this, of which many examples called imaret exist in Anatolia, were constructed to shelter itinerant dervishes.
The building was badly damaged during the Turkish War of Independence (1919–1922) and was later used as a storage depot. After 1955 it was restored and opened as a museum. The museum displays ceramic finds from the excavations in Iznik as well as various antique and ethnographic objects recovered in archaeological excavations in and around Iznik.

Built of bricks, stones and marble this relatively plain monument is noteworthy for the variety of its superstructure, especially inside. It was built by Sultan Murad I in the name of his mother after her death. Daughter of the Byzantine tekfur of Harmankaya, Holofira married Orhan Gazi and converted to Islam, taking the name Nilüfer Hatun. She was renowned for her charitable work. The structure was built in the style of a mosque with tabhane (guesthouse), which housed the missionary dervishes who played a great role in the Islamisation of Anatolia during the AH 8th-9th / AD 14th-15th centuries.

There is an inscription of three lines carved on a marble plaque above the entrance portal. The monument was built for Nilüfer Hatun, mother of Sultan Murad I and was completed on 30 Rabi' al-Awwal 789 / 8 April 1388.

Mehmet Kahyaoğlu has been working as a lecturer for art history, iconology and mythology in Dokuz Eylül University, Faculty of Fine Arts since 2002. He was born in Soma in 1964. In 1986 he graduated from Dokuz Eylül University, Department of Mining Engineering. Between 1990 and 1993 he worked as a mining engineer in Çimentaş cement factory (Izmir). He worked as a licensed professional tour guide between 1993 and1997 while he continued his studies at Ege University, Faculty of Letters, Department of Art History, which he graduated from in 1997. Between 1997 and 2000 he worked as local co-ordinator of the Museum With No Frontiers – Islamic Art in the Mediterranean Project. Between 2000 and 2001 he worked as the director of İzmir Sanat, the cultural centre of the Metropolitan Municipality of Izmir. He received his MA on Byzantine Art from Ege University, Institute of Social Sciences and is preparing his thesis at the same institute.
Translation by: Barry WoodBarry Wood