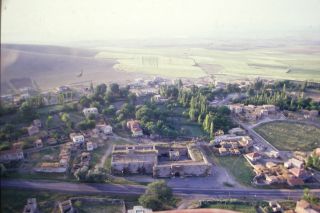 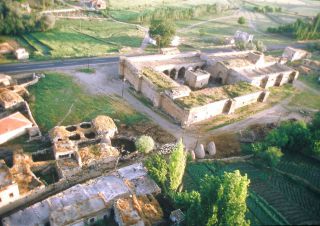 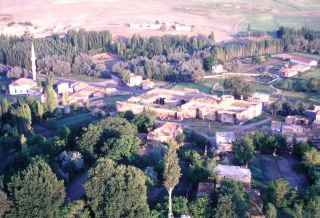 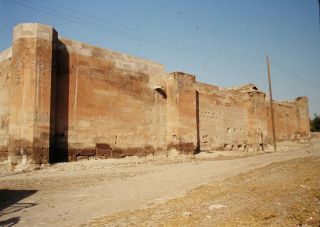 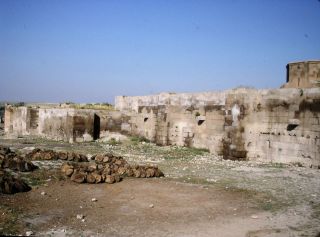 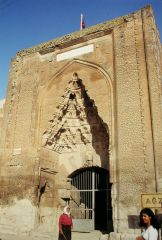 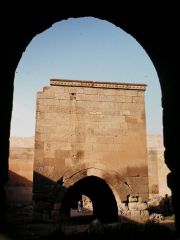 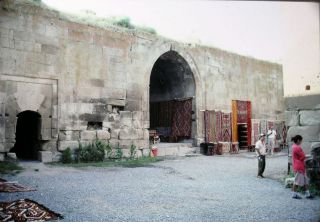 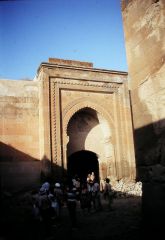 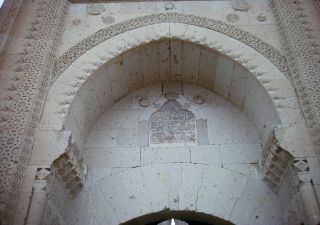 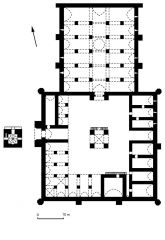 Ağzıkara Han, which consists of an open courtyard and a covered section, is an important example of the caravanserais with a courtyard from the Anatolian Seljuq period. The building's core structure is of rubble bound with mortar, while the entirety of its walls, buttresses, vaults, arches and piers are faced with fine, dressed stone. The corner towers and high, thick walls are supported by buttresses. The upper levels of the façades have slit-like windows (embrasures). The courtyard is entered through a portal on the north side, in whose west wall two fountains have been installed back to back.
The courtyard has an almost square layout with iwans. Both the west part of the entrance-iwan and one section of the west side have double porticoes, while the south side and the south section of the west wall have covered rooms. In the middle of the east side of the courtyard is the portal leading into the covered section.
In the centre of the courtyard is a kiosk-masjid, which sits on top of a square baldachin formed of four piers connected by pointed arches. The masjid is accessed by a double staircase on its east side. The interior of the masjid, a square plan, measures 4 m x 4 m and is surmounted by a dome rising on squinches decorated with muqarnas. A fountain said to have once existed below is no longer extant.
The covered section of the caravanserai is rectangular, almost square. It has a main aisle running east to west flanked with six vaulted aisles perpendicularly, extending north and south. A lantern dome over the main aisle is, like the dome in the kiosk mosque, supported on squinches filled with muqarnas.
Ağzıkara Han's inner and outer portals show similarities of design and ornament and are decorated with geometric motifs. The mihrab of the kiosk-masjid also features assorted rosettes.
While Anatolian Seljuq caravanserais usually have the respective entrance portals to their courtyards and to their covered sections situated on the same axis, in this structure the courtyard portal has been placed off to the side. The building and the masjid in its courtyard are rare and unusual examples of Anatolian architecture.

The Ağzıkarahan caravanserai was commissioned by Hoca Mesud in the reign of Sultan Alaaddin Keykubad and is located on the main commercial Konya–Kayseri route in Anatolia that bridges Asia and Europe. An important example of Anatolian Seljuq caravanserais with courtyards, the structure comprises a courtyard and a covered section. It has the look of a stronghold with its thick, high walls reinforced by corner towers and buttresses. This caravanserai is one of the few in Anatolia to have a masjid rising on a baldachin in the middle of its open courtyard. 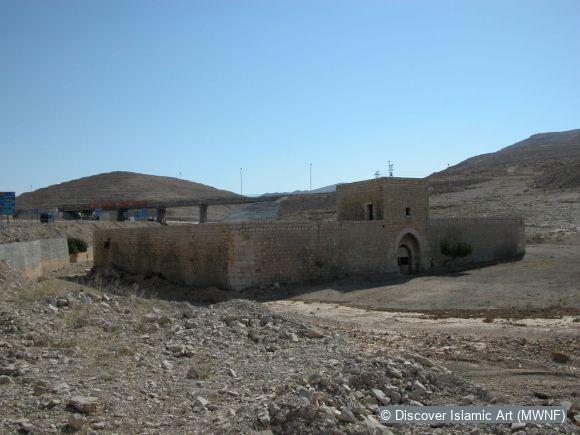