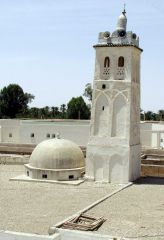 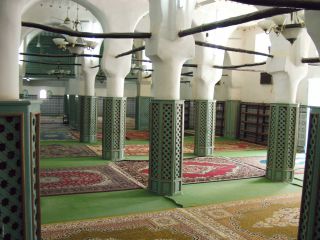 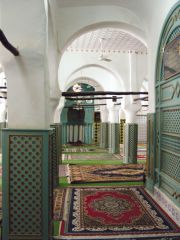 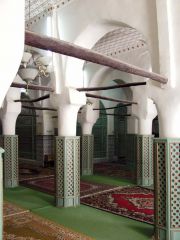 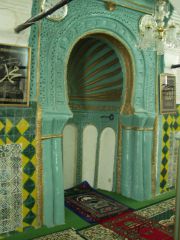 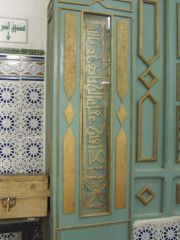 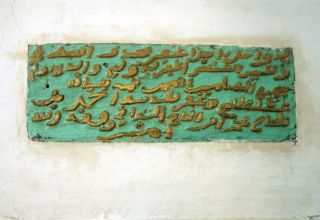 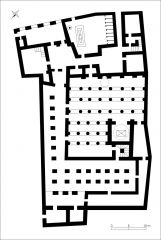 ‘Uqba ibn Nafi, one of the Prophet's companions and governor of Ifriqiya, met his death during a battle against Koceïla and his troops, who were waiting for him near Tehouda on his return from a victorious expedition that had led him as far as the Atlantic. The Sidi ‘Uqba mosque was built around ‘Uqba ibn Nafi's tomb.
The sanctuary and the mosque demonstrated great simplicity, all the architectural elements having been covered over in white-washed mortar; not a single expensive, ornate or precious material was used for the construction. The mosque's layout is not dissimilar to that of the most ancient mosques, notably the very first one built by the Prophet himself, as is demonstrated by the parallel positioning of the bays to the qibla wall. The column bases were linked together by a raised section of floor, about 10 cm, that defined the area required for the aligned prostration of worshippers. The columns, some of which are palm-tree trunks covered in white-washed mortar, are crowned with capitals moulded from white-washed mortar, and support arches from which all decoration is absent. Highlighted by an arch – which is decorated with stucco featuring simple geometric motifs and irregular tracery – the mihrab is crowned by a semi-circular dome with radiating fluting. The capitals are also fluted, and are thus suggestive of highly stylised palm trees. Two domes emerge from the terrace that covers the prayer hall; one over the tomb, the other over the space in front of the mihrab.
The famous two-leafed door, made of carved cedarwood, that guards the access to the prayer hall from one of the three entrances from the side courtyard, was moved to the opposite wall during development work undertaken in the mosque in 1969–70. Renovation work and work involving the 'integration' of the mosque into an enormous cultural complex were carried out over the last few years under the claim of endowing the sanctuary and mosque with some 'gloss': in fact, this work has totally defaced the spirit of the place.

The sanctuary and the mosque are both very simple. The mosque, whose bays run parallel to the qibla wall, are reminiscent of the most ancient mosques. The columns, some of which are palm trunks covered with lime mortar, are crowned with capitals supporting plain arches. The mihrab has a half-dome vault and is framed by an arch decorated with simple geometric motifs in stucco. Two domes cover the tomb and the space in front of the mihrab. The famous carved cedarwood door has survived.

67 / 686 for construction of the tomb; comparing the letters of the inscription on the tomb with those of Kairouanese epitaphs dated to around 416 / 1025 would place the 'renewing of the sanctuary' to around the same time. Other inscriptions also exist: on the wall of the sanctuary, a wooden plank carrying an inscription sculpted in relief offers the date of 1215 / 1800; similarly, the mosque's mihrab is dated to 1214 / 1789. According to Captain H. Simon in his “Notes sur le mausolée de Sidi Okba” (Revue africaine, 1909, pl. III), these dates refer to expansions or repairs.