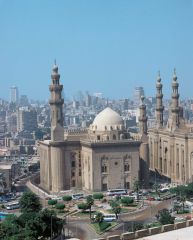 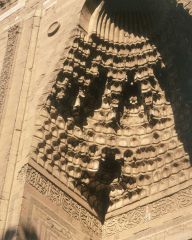 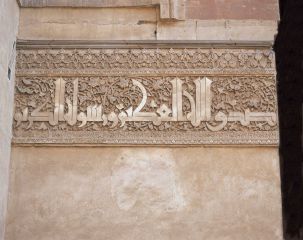 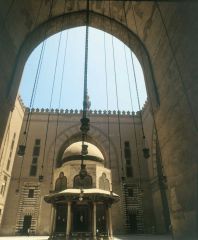 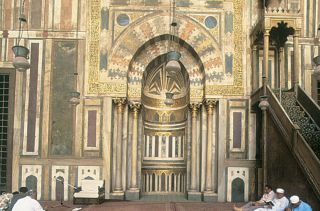 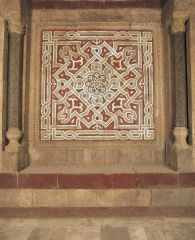 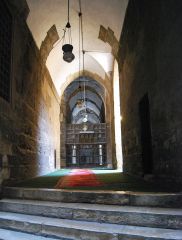 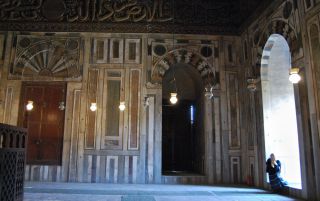 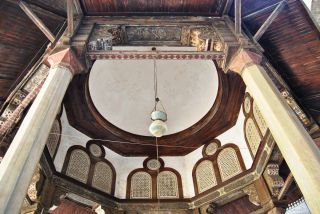 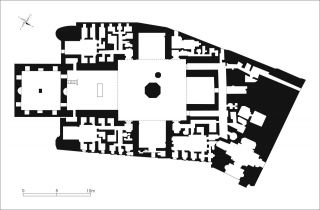 Madrasa and Mosque of Sultan Hasan

The building is located at the Citadel Square, Cairo, Egypt

Muhammad ibn Bailick al-Muhseini, the chief architectural designer of his day, supervised construction of the building. He placed his name after that of the sultan on the inscription band inside the Hanafi Madrasa.

This building combines strength and splendour, elegance and beauty, as well as a multiplicity of decoration. One of the building's most prominent features is the principal, northern, façade that extends to about 145 m in length and reaches a height of 38 m. The façade consists of a variety of stone and marble decoration and ends at the top with a splendid and exquisite cornice, consisting of nine tiers of minute muqarnas which resemble a honeycomb. This façade includes a towering portal, considered among the most imposing entrances to an Islamic building in Egypt. The portal is characterised by an arched ceiling which is a semi-dome decorated with a superb series of muqarnas tiers. Influenced by Seljuq architecture (AH 429–590 / AD 1038–1194), it belongs to an era when entrances were distinguished by lavish decoration.
Two minarets, the older being the southern minaret at 81.60 m high, top the eastern façade of the building. Both minarets consist of a square base followed by two octagonal stories in the manner of Mamluk minarets. The minarets were renovated in the 20th century.
The floor plan of the building is polygonal with a surface area of 7,906 sq m; the longest side is 150 m in length, and the shortest 68 m. The building is made from stone and consists of a central open courtyard in the middle of which is an ablutions fountain. The courtyard is surrounded by four iwans which constitute the mosque proper. In each corner of the building, is a madrasa, each of which specialised in teaching one of the four schools of Muslim religious jurisprudence (fiqh). The madrasas were accessed through doors located in the corners of the four iwans. Each madrasa consisted of a central courtyard, in the middle of which a fountain and an iwan stood, as well as three floors which included student residential quarters. The building was influenced by the phenomenon of building madrasas, where the goal was to teach religion according to the Sunni schools of law, delving deep into the knowledge and teaching of Islam. Such madrasas prevailed particularly during the Seljuq and Atabeg periods, of which the Madrasa of Nur al-Din Mahmud in Damascus is another example.
It should be noted that the qibla iwan is the largest iwan of the mosque, and that it is spanned by an enormous pointed vault. The iwan overlooks the courtyard by means of an arch, the largest arch set over an iwan in Egypt. This iwan includes a number of splendours of Islamic art, for its walls are panelled with coloured stone and marble, the upper parts of which boasts a band of stucco decoration, that consists of an inscription based on Qur'anic verses in kufic script on a floriated background, the style of which is rarely seen. The iwan also includes a decorated mihrab ornamented with polychrome marble and gilded inscriptions, considered to be one of the most beautiful mihrabs in Egypt.
The building includes a mausoleum that is rich in decoration and within which the son of the builder, Shihab Ahmad (d. AH 788 / AD 1386) is buried. The mausoleum is square in form, its sides measuring 21 m in length, and it is covered by a dome 48 m high. The marble mihrab in this mausoleum is embellished with detailed geometric decoration in marble mosaic.
When Sultan Hasan died in AH 762 / AD 1361, the building was almost complete except for some supplementary works that were completed by Bashir al-Jamdar. These works comprised the execution of the marble wall revetment and the marble floors, the dome of the fountain in the courtyard (completed in AH 766 / AD 1364) and the two great door-leafs belonging to the copper doors that can now be found in the Mosque of al-Mu'ayyad Sheikh. The building of the mausoleum was completed in AH 764 / AD 1362.

This building combines strength and colossal dimensions with elegance, beauty and a variety of decoration. Its majestic portal, rising 36.7 m high, is one of the greatest in Islamic Cairene architecture. The building contains a madrasa (school) for each of the four schools of jurisprudence, accessed through a door in the corner of each of the four iwans. Each madrasa consists of a courtyard with a fountain in its centre, an iwan and floors including residential quarters for the students.

The building was dated based on a number of epigraphic inscriptions: on the door of the Hanafi Madrasa in the courtyard; another inside the mausoleum and, finally, on the building's two great copper door leafs, which were removed by Sultan al-Mu'ayyad Sheikh (r. AH 815–24 / AD 1412–21) to his mosque. One of the inscriptions gives the date of construction. 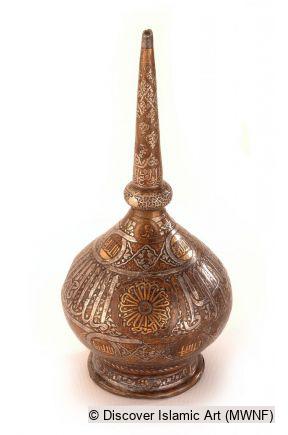 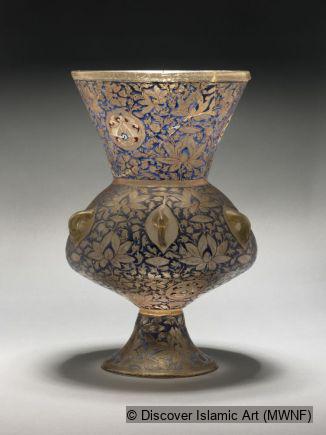 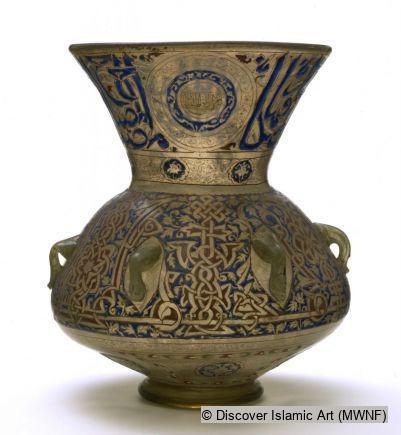