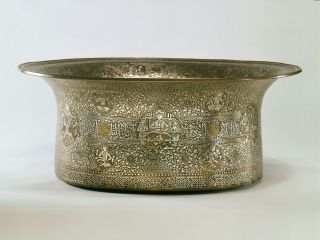 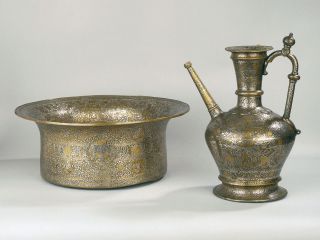 The jug and basin were used at court on dining tables for the washing of hands. Medieval Arabic sources include descriptions of this sort of utensil. The daughters of amirs, viziers, high-ranking noblemen, officials and merchants all had this hand-washing equipment as part of their trousseau. Judging by the iconographic motifs of its decoration, the Berlin jug and basin look as if they were made for a lawyer. The inscriptions include blessings of a general nature (well-being, wealth, health, knowledge and leniency) for the unknown owner. Its original magnificence is clearly visible, as it has been excellently preserved.
Judging by its shape, with its flap lid and straight spout, the jug has been made as a sculpted three-dimensional form. Its body, shoulder and neck are decorated with three friezes featuring figurative motifs within medallions of different sizes. The medallions are filled with depictions of thrones and riders and images of planets. The base of the neck shows 11 arched fields with standing figures in the style of Christian representations. A unicorn is being hunted in the animal frieze on the jug’s shoulder. There are additional Arabic well-wishing inscriptions within the friezes or spread over the jug.
In the bottom of the basin, six planets are drawn encircling the sun, and in a second frieze, the signs of the Zodiac are depicted in relationship to particular planets. As on the jug, the outer surface of the basin is decorated with six large medallions that depict a prince flanked by two bodyguards, scenes of hunting and revelry. They are linked together by an inscription wishing for strength and victory, knowledge and leniency, qualities belonging to Allah.
The complexity of the design and the highest quality of craftsmanship substantiate the high status of the person who commissioned its making. The jug and the basin are even signed with the name of the craftsman, which demonstrates that the artist was also held in very high regard.

The extremely fine design and workmanship of this basin and jug demonstrate the skill of the metal craftsmen working in Mosul around 1270. Commissioned by someone of high rank and depicting the planets and scenes of courtly life, the set may have been used for washing hands on special occasions.

The artist, ‘Ali ibn ‘Abdallah al-‘Alawi, who signed both the jug and the basin, lived during the mid-7th / mid-13th century.

The artist, who signed both the jug and the basin, includes in the inscription of his name an indication of his town of origin: al-Mawsili, ‘from Mosul’, signifying where he was born or where he worked. The signature and the motif of the figure with a crescent in front of its body suggest that it is very probable that this piece originates from Mosul. 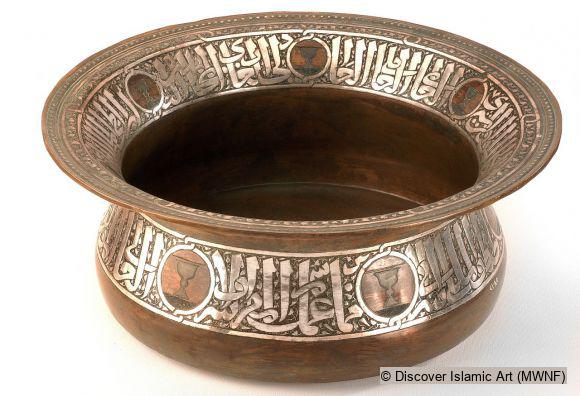 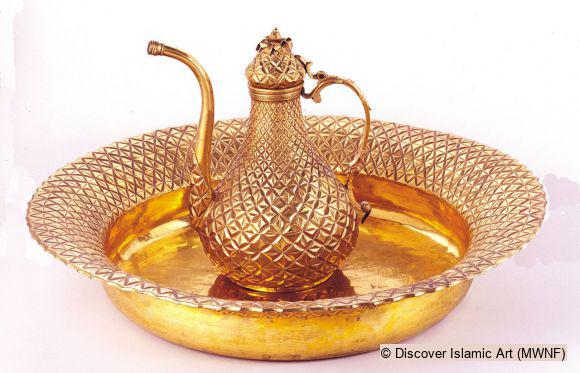 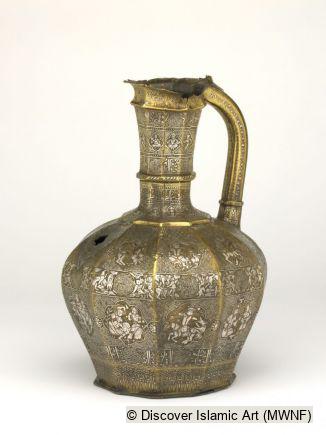 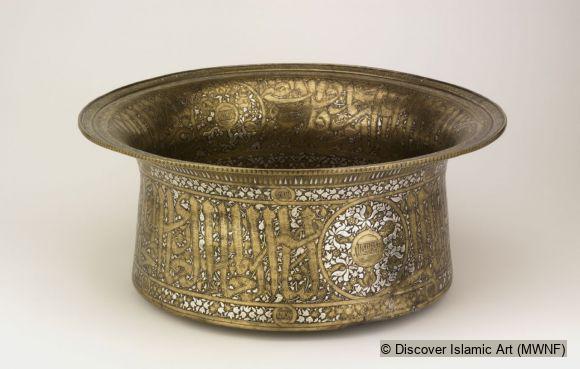 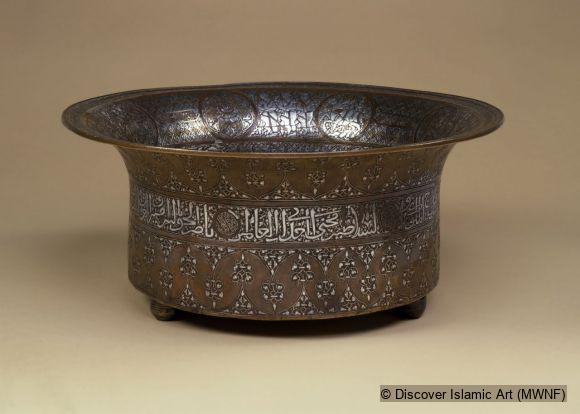