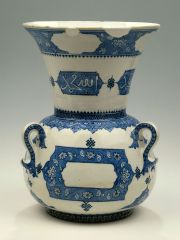 This large mosque lamp is composed of a relatively stocky, globular body, over which sits an upper part that is shaped like a funnel. Three rounded handles, which are abstract renditions of snake-dragons, are fixed onto the lamp’s shoulder, and are used for the attachment of chains or cords from which to hang the light. These handles are decorated with floral motifs, as figurative decoration within mosques was prohibited. There is a hole in the middle of its arched, low ring-base, from which an ornamental tassel would have been hung.
Empty white cartouches decorate part of the lamp’s body and neck. Its neck is also decorated with four blue geometric boxes of similar shape that are linked together by plaited knots, and which contain inscriptions denoting the names of Muhammad and Allah. The inscriptions themselves are interwoven with symbols of luck in the form of three spheres. More cartouches can be found on the decorative border along the lamp’s top edge. The ring-base is decorated with a plaited band. The cartouches on the body of the lamp, and the blue design across the transitional, narrowing space between body and neck, are embellished with a contour pattern of blossoms and leaves. Bands of plaited motifs adorn the space below the handles.
Mosque lamps made in ceramic were produced in the manufacturing place of Iznik during the Ottoman period until the middle of the 16th century. In earlier centuries, mosque lamps were mainly made of glass and were produced in many regions and lands across the Islamic world. They are based on the so-called ‘Light Verse’ of the Qur’an (Sura 24, verse 35), which states: ‘Allah is the light of the heavens and the earth. His Light may be compared to a niche that enshrines a lamp’.
Iznik Ottoman ceramic was as popular in Europe as it was in the Islamic world; so much so that Italian manufacturers in Padua, from the AD 17th century onwards, started imitating Turkish ceramics, in response to a ban at the time on private individuals buying Iznik ceramics manufactured in state workshops. The Iznik workshops went into decline from the AH mid-10th / AD mid-17th century onwards.

Mosque lamps such as this ceramic one were intended for use in a mausoleum or a mosque. It is decorated with geometric and floral designs and its inscriptions invoke God and Muhammad. The lamp would hang from the ceiling and would hold an additional container for the oil and wick.

The mosque lamp belongs to a group of vessels, classified together because of their painted decoration, which are dated to the beginning of the 10th / 16th century.

Acquired in 1900 by the Arts and Crafts Museum, Berlin, and later transferred as a long-term loan to the Museum of Islamic Art.

This mosque lamp could only have originated from the Ottoman workshops of the town of Iznik, given the markings on the ceramic and the style of the paint work. 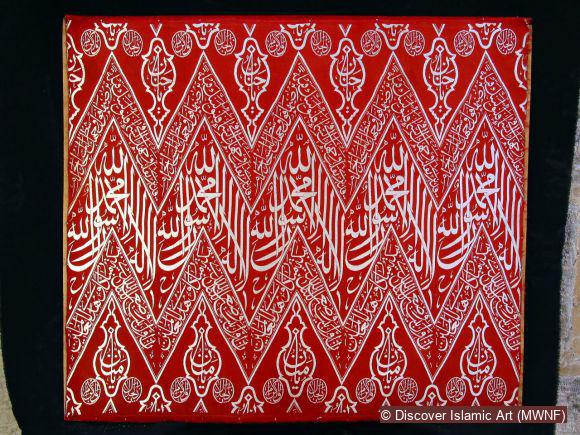 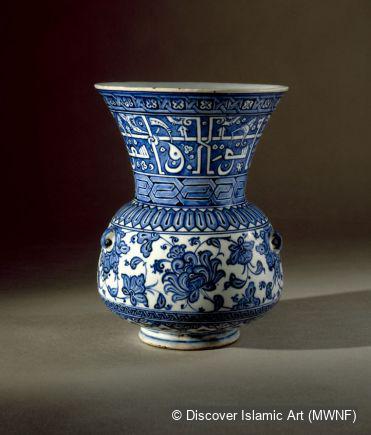 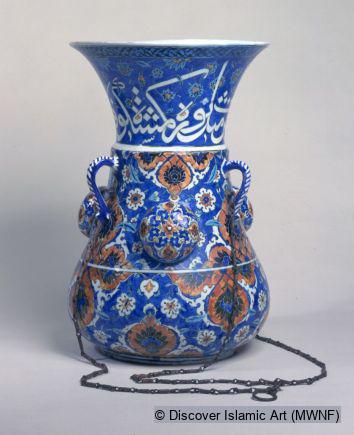 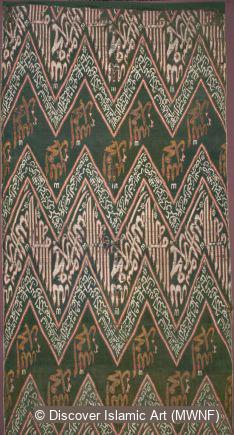