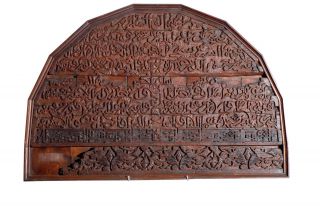 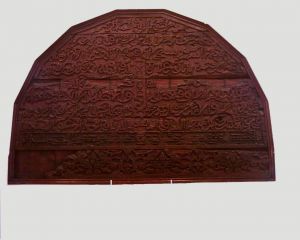 Pediment of a door

About National Museum of Antiquities and Islamic Arts, Algiers

This pediment takes the form of a half-polygon of nine sides, consisting of four panels; the first is ornamented with vegetal decoration; the remaining three are decorated with a nine-line inscription, sculpted in relief and in cursive lettering, except for the last line, which is in quadrangular kufic. The final six lines of the inscription are centrally divided by floral and geometric decoration. This inscription features the following text: 'May God protect us from Satan the abuser / In houses that God allowed us to build / in which men invoke his Name and glorify Him, morning and night (Qur'an, XXI, 36–37) / raised house, full of invocations, erected for the worship of God. He will pardon those who find themselves there / and the one who founded and built it, Yahyia ibn Mahdjuba, who offered it to God / Forgive him his past! Protect him from the heat of hell! Enable him to enter paradise where he will experience well-being! / Grant him Your assurance and Your protection against the terrors of the day of resurrection! Offer him a place at the top of paradise! What success for those who are there! / In the year chin, djim, the construction was finished and completed with the help of God. Oh reader, make wishes in favour of he who built this / Through the forgiveness and indulgence of God, through the intercession of the best of men! Do it so that one can always read the tradition to the people.'
This inscription is the only one in Algeria that features a date written in the form of a chronogram (in adding together the numeric values of each letter that it consists of, one obtains the date it conceals). This pediment was previously situated above the entrance to a zawiya known under the name of Zawiya Ibn Mahdjuba, adjacent to a cemetery. The building was demolished around 1865, during the widening/opening of the rue Nationale.
The person mentioned is the sheik Abu-Zakariya Yahyia ibn Mahdjuba (d. AH 1017 / AD 1608), who was a mufti and who is mentioned in a manuscript contemporary to the era.

This pediment stood above the entrance to a zawiya and consists of four panels. The first is decorated with plant motifs and the other three bear an inscription carved in cursive characters (kufic in the last line) that glorify God and the patron of the work. It is dated by a chronogram included in the inscription.

Gift from E. Bigonet who, in 1878, undertook research in Constantine on the subject of this inscription, already published.

Merit is due to E. Bigonet, who was able to track down the person responsible for the demolition of the Zawiya Ibn Mahdjuba. This person authorised him to look through all the heaps that remained of the demolished building. It was thus that he recovered this inscription, which he then offered to the National Museum of Antiquities.

Leila Merabet "Pediment of a door" in Discover Islamic Art, Museum With No Frontiers, 2021. https://islamicart.museumwnf.org/database_item.php?id=object;ISL;dz;Mus01;29;en