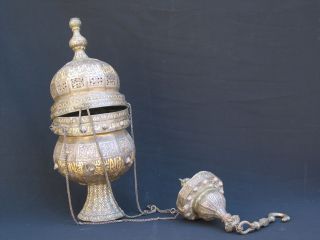 Copper, engraved and inlayed with gold.

An incense burner of great beauty and fine workmanship that is also in very good condition. The engraved inscriptions on it indicate that the Mamluk sultan, al-Zahir Sayf al-Din Abu Said Muhammad Jaqmaq endowed it to al-Haram al-Ibrahimi (the Ibrahimi Mosque) in Hebron (al-Khalil), where it remained for a number of centuries until it was transferred in 1928 to the Islamic Museum in Jerusalem. The burner is elongated in form and has ribbed and curved surfaces. It is composed of three sections: the bottom section, the top section and the attachment and chains. The bottom section of the burner is a spherical container in the shape of an inverted dome in concordance with the top section of the burner, which takes the form of an elongated dome. The upper part of the bottom section is spherical, transforming into a ribbed surface with 12 faces and terminating in a ribbed edge that also has 12 faces. The spherical surface contains gilded epigraphic decorations that read: “There is no God but God, Muhammad is the prophet of God and Ibrahim [Abraham] is the friend of God. This blessed burner was endowed by our lord, the Sultan, the Sovereign, the Ruler, al-Zahir Abu Said Muhammad, May God strengthen his triumph, to al-Haram al-Ibrahimi”. The burner rests on a slightly elevated base, which widens towards the bottom; it is ribbed with 12 sides and is decorated with gold lines.
The upper section is the cover or lid. It is in the shape of a dome faced by two spherical forms: the upper, smaller one and the lower. This section of the burner contains two inscriptions. The bottom of the cover has a ribbed surface of 12 faces, each containing vegetal decoration in the form of a lotus blossom. The cover terminates in a ribbed edge.
There are three suspension loops on the top of the lower section attached to which are chains; the chains are attached to the three suspension loops on the bottom of the burner. The attachment and chains is in the form of a small dome, the apex of which is connected to the hook for hanging. The dome of the attachment is ornamented with vegetal decoration in addition to 12 small spheres, which adhere to the ribbed neck. There is a gilded inscription on the attachment that reads: “The burner is thus the burner of the humble servant, Abd al-Qadir bin Muhammad Qabzi”.

This burner was donated, as indicated by its gilded inscriptions, by Sultan al-Zahir Jaqmaq. It is an elongated burner with ribbed surfaces with twelve divisions. It is composed of three sections: the bottom, the upper section with the lid, and the attachment and chains. It is decorated with vegetal motifs.

This piece was dated by the inscriptions that indicate this incenser belonged to Sultan al-Zahir Jaqmaq.

The piece was transferred from the Haram al-Ibrahimi (the Ibrahimi Mosque) in Hebron to the Islamic Museum in Jerusalem in 1928.

It is probable that the incenser was made in Cairo for its construction resembles other objects from the ateliers in Cairo during this period. The incenser was endowed to the Haram al-Ibrahimi in Hebron by the Mamluk sultan, al-Zahir Sayf al-Din Abu Said Muhammad Jaqmaq, an assertion based on the inscription. 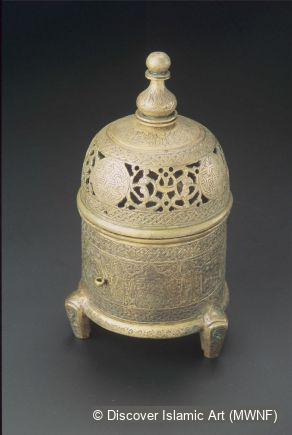 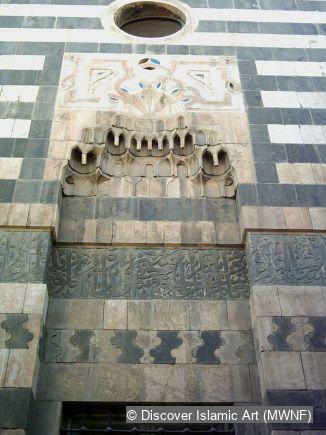 Pilgrimage | The Quest for Baraka – Pilgrimage to Jerusalem and Palestine