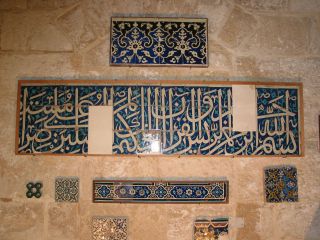 Tile from ceramic inscription panel of the Dome of the Rock

A tile forming part of a ceramic inscription panel that once decorated the exterior octagonal pinnacle of the Dome of the Rock. Sultan Sulayman the Magnificent (r. AH 926–73 / AD 1520–66) commissioned the panel while renovation work of the Dome of the Rock was being carried out, in around AH 969 / AD 1560. Each tile is 25 cm high by 25 cm long, and the whole inscription panel is 160 m long. The panel is decorated with a long Qur'anic inscription consisting of the complete text of the chapter “Ya-sin” (Chapter 36). The text is written in the Ottoman thuluth script in white against a dark-blue background. The inscription is interspersed with vegetal decoration consisting of intertwining spiralling stems, with blossoms and leaves. The tiles have a characteristic simplicity, and are of fine colouring and very detailed workmanship. The tiles represent an early example of Ottoman ceramics, used generally in architecture during the period, and more specifically in the Dome of the Rock. Buildings were often panelled with ceramic tiles during the Ottoman period, in fact, such tile work is a distinguishing trait of Ottoman contributions to the restoration and renovation of holy places, not only in Jerusalem but also in places such as Mecca and Medina.
The Islamic Museum have acquired all sections of this inscription panel which was removed from The Dome of the Rock in 1960 during restoration works. The Museum has since housed and preserved the inscription panel as a witness to the first stage of ceramic-tile panelling on the outer walls of the Dome of the Rock. It is worth noting that previous to these tiles, the outer octagon of Dome of the Rock was covered with a glass mosaic, which had deteriorated badly due to age, until Sulayman the Magnificent ordered the removal of the damaged mosaic and replaced it with these tiles.

A glazed tile from a band that wrapped round the exterior octagonal pinnacle of the Dome of the Rock, ordered by Sultan Sulayman the Magnificent during his renovation of the Dome. It is written in thuluth script in white against a dark-blue background. The verses are interposed with vegetal decorations.

The inscription panel is dated.

The piece was transferred in 1960 from the Dome of the Rock to the Islamic Museum.

Jerusalem was narrowed down as the place of production for these tiles. This is supported by historical sources indicating the presence of a workforce and Ottoman ceramic tile-making kilns in the area.

Nazmi Al-Ju'beh "Tile from ceramic inscription panel of the Dome of the Rock" in Discover Islamic Art, Museum With No Frontiers, 2021. https://islamicart.museumwnf.org/database_item.php?id=object;ISL;pa;Mus01;31;en 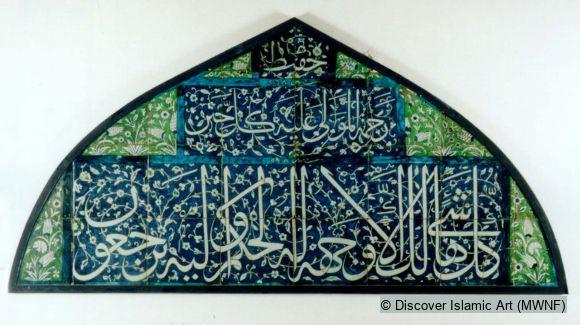 The Ottomans | Guardians of the Holy Sites