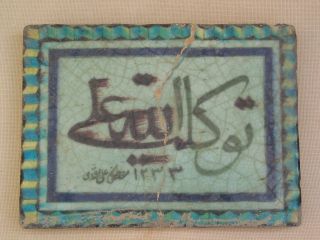 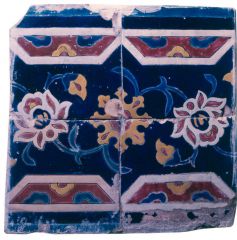 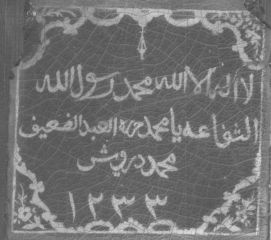 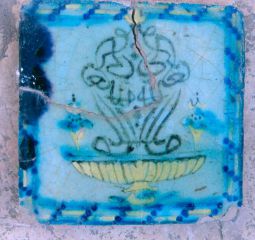 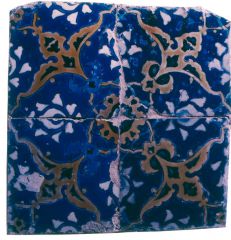 A rectangular ceramic, glazed tile that was made during the restoration of the Dome of the Rock in AH 1233 / AD 1817 and with the name of one of the tile-makers inscribed on it. The inscription is composed within a 2.5 cm-wide frame of turquoise, undulating with an extremely light-green pigment, which is adjacent to another frame in dark-blue. The text, written in green and black against a pale-green background, reads: “Trust in God 1233 [1817] Mustafa Ali Effendi”. It is known that a number of tile-makers who worked on the restoration at the Dome of the Rock immortalised their names in a similar way, fixing the tiles in various places. The Museum has acquired another tile made by the same tile-maker, which reads: “Reckon with the One God and That is Enough, Mustafa Ali Effendi, 1233 [1817]”. The tiles are very alike; there is only a slight difference in the colour scheme in that the text and the “frame” of the second tile is decorated in dark-blue while the background takes on a very light-blue. There is a third tile by the same maker which was produced after those already discussed. This tile bears the text: “If you ask, Ask God 1234 [1818] Mustafa”. This inscription is written in light-blue against dark-blue.
It is possible that these tiles formed the penultimate stage in the six stages of tile restoration at the Dome of the Rock, the final stage taking place in the 1970s. Despite the tireless attempts of the tile-maker to copy the tiles of former stages while replacing damaged tiles with new ones, one can still distinguish the different stages of restoration by means of the detailed workmanship, the colouration, glazing and in other artistic aspects, all of which help in ascertaining the dates of the restoration process. During the process of restoration a large number of tiles were made in Jerusalem; a number of them have been acquired by the Islamic Museum. However, some of the tiles required for the restoration were imported from Kütahya, or from Iznik in Turkey.

A glazed ceramic tile which (like similar ones) records the name of the craftsman who contributed to the renovation of the Dome of the Rock in AH 1233 / AD 1817. It is painted in a turquoise colour mixed with a light green. The name is written in green and black.

The tile inscription states the date of production.

The piece was transferred from the Dome of the Rock to the Islamic Museum during the restoration works of 1966.

It is thought that kilns and ceramic workshops were set up at the Haram al-Sharif. However, the tile ceramicists would most likely have been from Damascus, for the names of a number of them repeatedly state the agnomen, “al-Dimashqi”, meaning “from Damascus”. 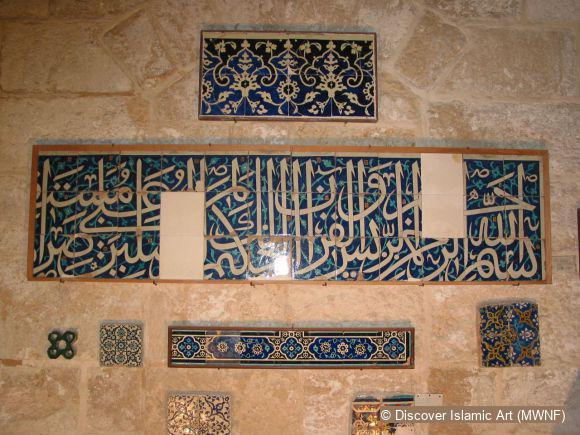