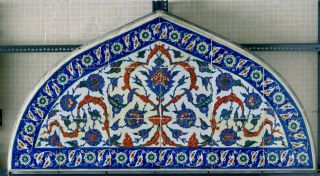 Tile panel in the shape of a tympanum

Ceramic made from siliceous clay, painted and glazed.

Panel of glazed tiles decorated in blue, turquoise, green and yellow. The central composition is framed by scrolls of stylised clouds forming a serpentine band which encloses a lotus flower in a trefoil knot. Unfurling in a spiral from the central motif are slender boughs with leaves, flower buds and hatayi-style motifs (garlands of flowers of Chinese inspiration). In Ottoman architecture panels of tiles were used mainly to decorate interior rooms.
It has been claimed that this panel belongs to a set of around twelve almost identical tympana, which decorated a building commissioned to be built by Piyale Pasa, Lord of the Admiralty and protégé of Sultan Selim II. There was some doubt as to which building this might be: the mosque or the palace. The most widely held view is that the panels were removed from the Mosque of Piyale Pasa in Istanbul, probably built by the architect Sinan in AH 980–1 / AD 1573–4, since all the tympana disappeared and only the mihrab (prayer niche) remains.

This tile panel belonged to the Piyale Pasa Mosque in Istanbul. The piece is dominated by plant motifs. The central composition is framed by stylised clouds forming a strip enclosing a lotus flower, from where other plant motifs are developed.

By methods of stylistic analysis and by comparison with pieces from the same period. The stylistic similarities with the tympana from the mosque of Selim II, built by Sinan in Edirne in 975–82 / 1569–75) and with the tomb of the same sovereign in Istanbul (which Sinan finished building in 981–2 / 1574–5) are undeniable. Furthermore, all the tympana which formed this set are dated to AH 980 / AD 1573, which confirms the dating of this panel.

By expert examination. The European collections in which the tympana from this set are to be found, such as the Louvre Museum and the Museum of Decorative Arts in Paris, confirm the provenance of these panels to be the Mosque of Piyale Pasa in Istanbul.

Maria Queiroz Ribeiro "Tile panel in the shape of a tympanum" in Discover Islamic Art, Museum With No Frontiers, 2021. https://islamicart.museumwnf.org/database_item.php?id=object;ISL;pt;Mus01_A;49;en 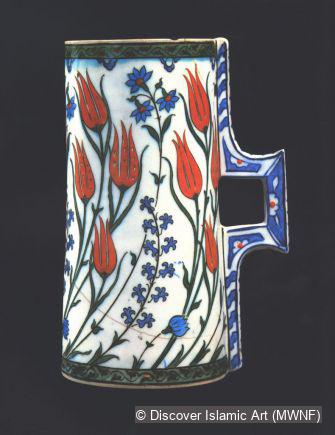 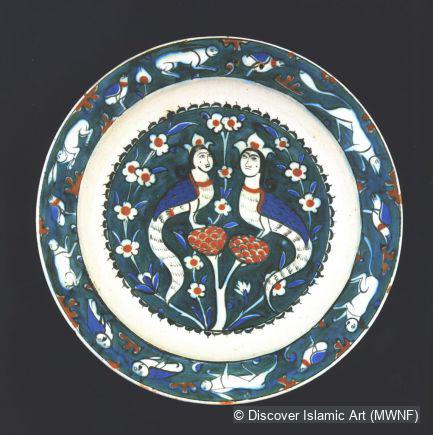 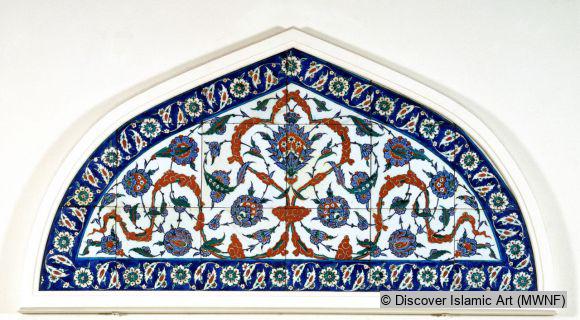 The Ottomans | Art in the Spaces of Prayer