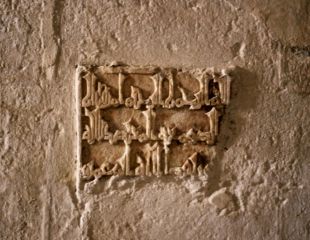 This is the only inscription in Portugal that relates to the construction of a minaret. The piece is conserved next to a fountain inside Moura Castle. Although its precise original location is not known, everything suggests that the stone is not very far from its original position. It is likely that it was commissioned from workshops in Seville.
The text refers to the construction of the minaret of the mosque of Moura by order of al-Mutadid, who then governed (mid AH 5th century / AD 11th century) the whole southwest of the Peninsula. The modest role played by Moura during the Islamic period leads us to associate this stone with a symbolic indication of laying claim to the territory of Moura. It is important to note that the important Totalica seams of silver lay nearly 20 km from this fortification, and that control of these mines had been a motive for continuing battles throughout the AH 3rd century / AD 9th century. The building of the minaret and the laying of the stone would have been intended to leave no doubt as to who was to be in control of the region from this time on.
The piece has been slightly damaged and the text is incomplete, with its last line missing. According to Nykl, it would originally have been approximately 44 cm high and 56 cm wide. The text is condensed into three lines, which allow a partial reading:
'In the name of God, the Merciful, the Compassionate.
[This] minaret was ordered to be built by al-Mutadid billahi
[al-Mans]ur bi-fadli-llahi abu Amr.'

This tablet commemorates the erection of a minaret in Moura by al-Mu‘tadid in the mid AH 5th / AD 11th century. It is located in the town’s castle near to the site of the mosque. It acted as a symbolic claim for control over the silver mines in the Moura region.

The piece is located close to its original position, since the mosque was built inside the castle. The English traveller Murphy mentions the stone in this location around 1790.

The Muslim West | Mosques: A Place for Prayer