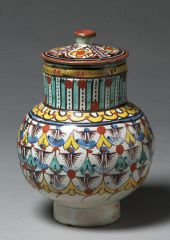 The spherical jar stands on a high foot and has a cylindrical rimless neck with a flat lid with a knob. The body is covered inside and outside with an opaque, pale turquoise-coloured tin glaze. In the lower part the glaze is not thick enough so that the reddish colouring of the body shines through the glaze. The abstract decoration of the jar is mainly composed of a series of vertical stripes alternating with dotted lines, called 'millipedes', around the neck and a scale pattern filled with stylised half-carnations on the spherical section of the jar. The foot-ring is undecorated. The colours used are a deep limonite yellow, two gradations of brown, a light one of iron oxide and a dark one of manganese, and cobalt-blue and copper green. The use of brown, yellow, blue and green as full, unmixed tones is the characteristic colour scheme of Moroccan polychrome faience. Faience is the type of decoration: after a first firing the potters put on the opaque tin glaze on the earthenware vessel; the mineral pigments used for the polychrome decoration were applied over the dried glaze; in a second firing glaze and pigments melted together.
The small and large red dots irregularly spread over the whole outside surface of jar and lid are a striking feature. It is a paste with a base of red lead applied over the glaze by fingertip. After drying, the paste appears like red wax. However, this kind of decoration was not executed by the potters themselves. It was done by the faience traders, at first to cover the traces of the firing tripods on plates and later on all kinds of pottery vessels.
Faience was an urban ceramic in Morocco whose most important centre of production was Fez. The objects made by the faience potters were mostly functional and for everyday use. This pot was possibly used for storing fat or yeast. Unlike other examples of this kind of stock pot, however, this one does not have the usual two handles.

Jar on a high foot and with a flat lid with knob. The decoration is composed of vertical stripes alternating with dotted lines and stylised half-carnations. The colour scheme is characteristic of Moroccan polychrome faience. This pot might have been used for storing fat or yeast.

Dating is difficult. There are only a few dated faiences and the same forms and patterns were used throughout various periods. The red dots were probably common from the end of the 12th / 18th century.

Bequest from the Bielke collection.

On the basis of the pattern, the technique and the colour scheme. 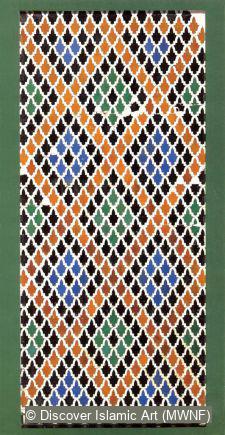 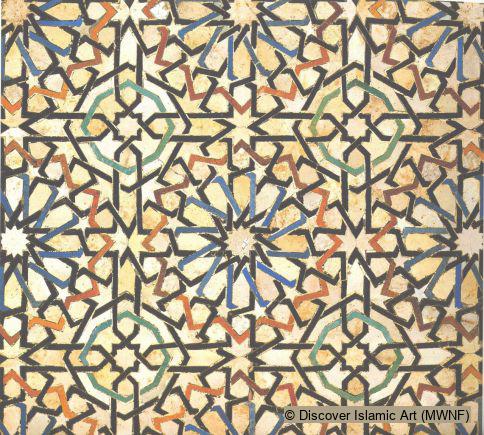