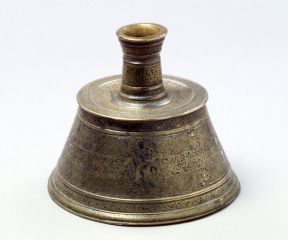 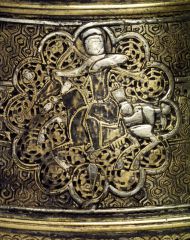 The candlestick is of traditional form. It has a truncated conical base, a shoulder with a depressed inner circle and a projecting rim, and a short cylindrical neck that rises from the centre of the shoulder. However, the solid, conical candle holder decorated with an arabesque seems not to be original. Similar candlesticks show candle holders that repeat the truncated shape of the body. Around the neck is a naskhi inscription over scrollwork. The concave area of the shoulder bears a kufic inscription interrupted by four roundels with rosettes. The inscription is set against a background of scrollwork and is enclosed by a broad twinned band. The body is decorated with four poly-lobed medallions that are linked by a kufic inscription. Above and below this inscription band are eight small roundels showing musicians such as a drummer and lute and harp players. The whole is set against a background of a thickset double-Y pattern. The decoration of the four medallions is dedicated to the hunt. Each of the depicted mounted huntsmen is shown in a different posture. One, turned backwards, attacks a quadruped with a sword carried in his right hand. The next hunter is armed with a crossbow, and the last two are engaged in hunting with a lance. One of them lances a quadruped in front of his horse, the other lances an animal below his horse. All the scenes are set against an arabesque background. The heavily decorated surface of the body is only interrupted by three ribs which separate the main figurative panel from the enclosing narrow bands of geometric and floral patterns. Most of the silver ornamentation that was inlaid in order to contrast the inscriptions, background patterns and figurative depictions with the polished brass is now missing. The bottom of the candlestick is plain.

Candlestick with a truncated conical base and a short cylindrical neck. The body is richly decorated with inscriptions over scrollwork, roundels and poly-lobed medallions showing musicians and hunting scenes. The inlaid silver, contrasting the ornamentation with the background, is now missing.

The shape of the candlestick, the Y-pattern of the background and the organisation of the design are similar to a candlestick made in Cairo and dated 668 / 1270, now in the Museum of Islamic Art in Cairo.

Purchased from the collection of F. R. Martin in 1898.

The shape of the candlestick, the Y-pattern of the background and the organisation of the design are similar to a candlestick made in Cairo and dated 668 / 1270, now in the Museum of Islamic Art in Cairo. 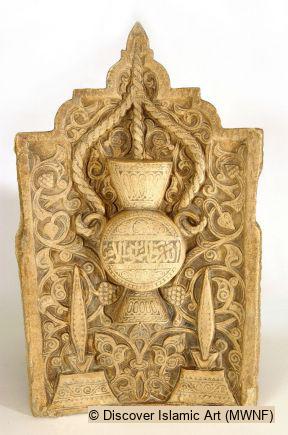 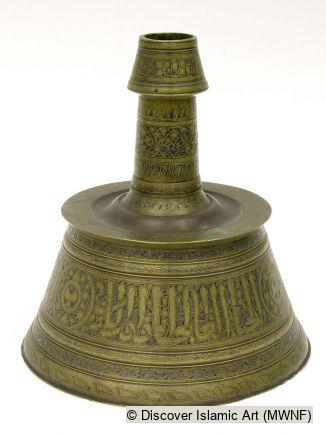