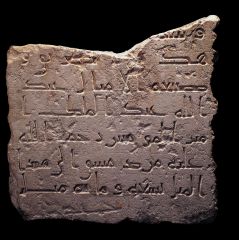 A distance marker or milestone usually erected to indicate distance between two stations along a pilgrimage or trade route, this one belonging to the period of the fifth Umayyad caliph, 'Abd al-Malik ibn Marwan (r. AH 66–86 / AD 685–705). The milestone is nearly square and has an inscription incised on its surface. The inscription consists of eight lines of kufic script. It cannot be read in its entirety because the upper section of the milestone has broken off and is missing. The legible portion reads: 'The slave of God, the commander of the faithful 'Abd al-Malik – may God's mercy be upon him – erected this stone. From here to Damascus is 109 miles'.

Very few inscriptions have survived from the Umayyad period to the present. In addition, this milestone is significant because it shows the stylistic development of kufic script on stone during the Umayyad period.

In the early years of Islam, distance markers were erected on important trade and pilgrimage routes in order to show the distances to the travellers. These milestones bear date, patron names and toponyms related to the region, and are thus of documentary importance.

The object was dated to 66–86 / 685–705 based on the mention in the inscription of 'Abd al-Malik ibn Marwan, who was the caliph during this period.

Inventory records indicate that the object was found amongst the ruins of Khan al-Hatrura at Eriha and taken to the Tiled Pavilion in 1884. Since Khan al-Hatrura is further from Damascus than the inscription would infer (109 miles) it is thought that the milestone was brought to the khan from a place further to the north.