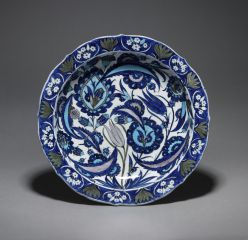 Stone-paste ceramic with blue, turquoise and olive-green painting under the glaze.

A stone-paste ceramic plate painted with blue, turquoise and olive-green underglaze. Covering the centre of the plate is a vibrant design of so-called saz leaves, fantastical flowers and a pair of tulips. Around the rim is a more ordered arrangement comprising clusters of green leaves alternating with bunches of white and blue flowers. The tulips grow from a leafy tuft at one edge of the bowl, while the other flowers encircle them. Plates produced at Iznik often display plants springing from one edge, providing a vertical orientation for the design. This plate is a fine example of the ‘saz’, or ‘Damascus’ style that became popular in the AH mid-10th / AD mid-16th century.
This plate exemplifies a type of ceramic produced during the 930s to 50s / 1530s to 50s, known collectively as one of the ‘Damascus’ group, as it was once thought to originate there. It has since been proven that the Damascus variety originated from Iznik designs, characterised in particular by the introduction of certain colours – olive-green, black and manganese purple – and the appearance of the so-called saz leaf and fantastical flowers.

Tulips and fantastical flowers are depicted ‘growing’ from one edge of this ceramic plate, while saz leaves float around the bowl in a graceful arrangement. Ceramics of this type of design and palette were produced in Iznik although they were once considered products of the city of Damascus.

A mosque lamp in the British Museum dated 955 (1549) provides the key to both the dating of this plate and all other vessels employing a similar colour scheme and using such motifs as the cloud scroll. Another fixed point is a group of tiles both in the Yeni Kaplica hammam (baths) in Bursa dated 959–60 (1552–3) and in the Ibrahim Pasha Mosque in Istanbul, built in 956 (1550). These tiles have the same colours and decorative motifs as the 'Damascus' group of ceramic objects, such as this plate.

Henderson Bequest to the British Museum of 1878.

Iznik in Turkey was the main centre of production for underglaze painted ceramics of this style and colour, and using this technique during the Ottoman period. 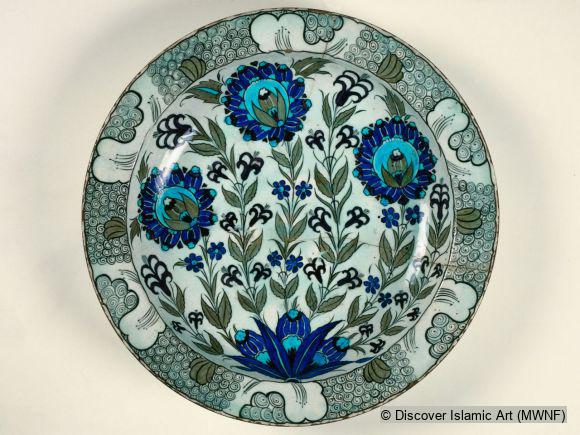 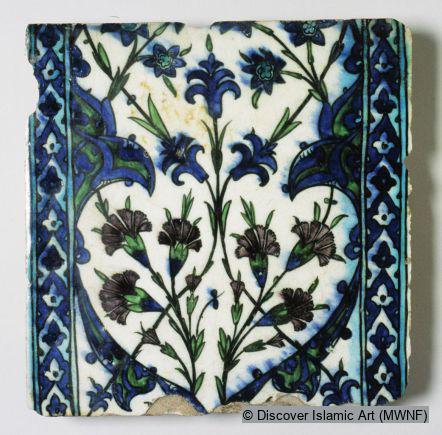 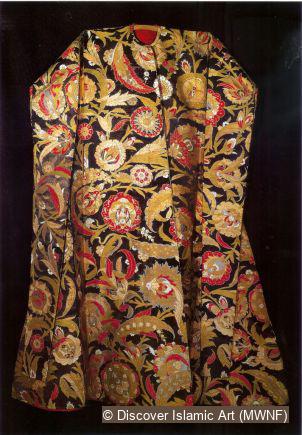 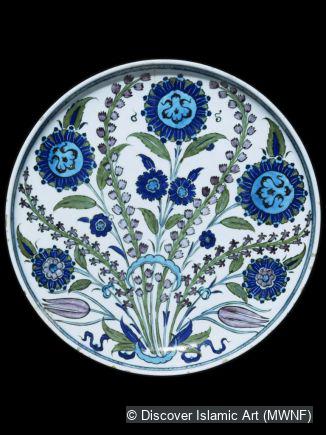 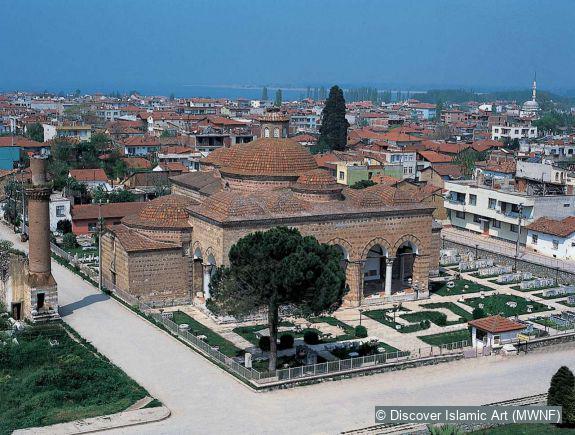