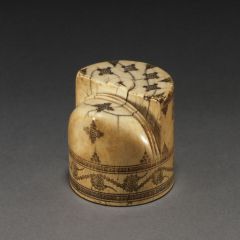 A large, circular chess piece with incised concentric circles, dots and lines. This abstract piece probably represents a King or Queen. The game of chess originated in India and reached Persia (Iran) during the Sassanid period in the AH 1st / AD 6th century. Arabic treatises on chess appear in the mid- AH 3rd / AD 9th century. From the Arab World, knowledge of the game passed to the West where pieces were often modelled on Islamic prototypes. This chess piece must have been part of a particularly impressive set. An almost identical piece is now in the Museum of Islamic Art in Berlin. The Fatimids in Egypt were active patrons of luxury objects made of ivory. After conquering Sicily in the early AH 4th / AD 10th century, the way was opened for Muslim craftsmen to travel to Sicily. This resulted in the transference of Fatimid-style painting and decorative arts to Sicily, which continued even after the Normans conquered the island in AH 477/ AD 1085.

Chess originated in India but soon became popular throughout the Islamic world and beyond. This large ivory chess piece must have belonged to a luxury set made for a patron of high rank or for the Fatimid royal court.

The shape and material of this piece relates to other pieces made in Fatimid Egypt in the 4th or 5th / 10th or 11th centuries. Given that there is a similarity in shape with another King or Queen chess piece made of rock crystal at the Victoria and Albert Museum, which is dated to the early 4th / 10th century, it is likely that this ivory piece is contemporaneous.

This piece would have been made in Fatimid Egypt or Sicily in the 4th–5th / 10th–11th centuries. 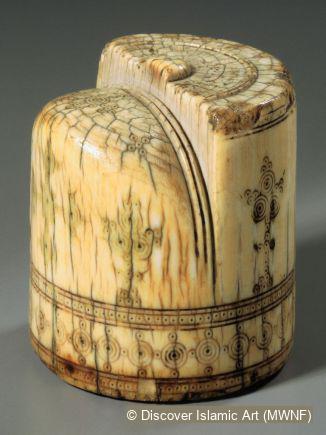