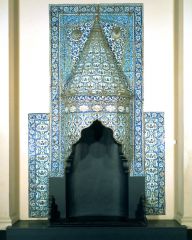 A large tile ensemble forming a chimneypiece for a fireplace. The hood is formed as a cone with seven faceted sides, each of which continues down to form the arch surmounting the fireplace niche. A repeat of the chintamani motif of three circles and two wavy stripes provides the main decorative scheme for the hood and arch. The hood is set within a tall rectangular frame whose border contains intertwining flowering stems on a blue background. The spandrels on either side of the hood include white arabesques on a turquoise background, dark-blue arabesques showing European influence on a white background, and two large ceramic bosses. At the base of the chimneypiece, two side panels echo the chintamani decoration of the hood and arch.

A band of cartouches at the top of the fireplace arch, one on each of its seven facets, contains inscriptions with the names of the 'Companions of the Cave' and their dog. (One cartouche has two names, so as to fit in all eight.) The 'Companions of the Cave' (ashab al-kahf), also known as the Seven Sleepers of Ephesus, are the subject of an ancient story which was repeated in the Qur'an (sura 18, verses 9–26). According to the story, seven Christian youths went into a cave to escape religious persecution and fell asleep, awakening miraculously several hundred years later. In later Islamic times the custom arose of hanging the names of the Seven Sleepers (as well as their dog, Qitmir) in one's house as a way of averting misfortune.

The fireplace was originally made for the palace of the Ottoman official Fuad Pasha, a building which burned down in 1857.

A large tile ensemble forming a chimneypiece for a fireplace. A band of cartouches contains inscriptions with the names of the ‘Seven Sleepers of Ephesus’ and their dog, names which were thought to bring good luck. It was originally installed in the palace of an Ottoman official.

One of the tiles has a short poem on it which reads, 'A man emerged to pray and said at once by way of a chronogram, “Here are Ottoman tiles apparent”'. The chronogram adds up to 1143.

By the 18th century, the tile industry at Iznik was in a state of complete collapse. When the Ottoman court began to take a renewed interest in decorative tilework under Sultan Ahmed III (r. 1115–43 / 1703–31), it reconstituted the industry in Istanbul.