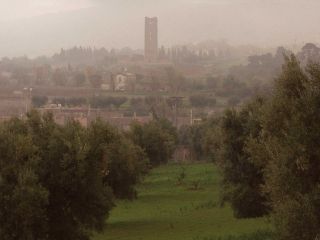 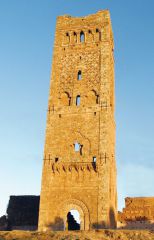 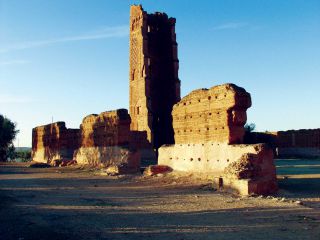 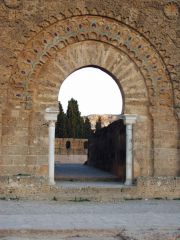 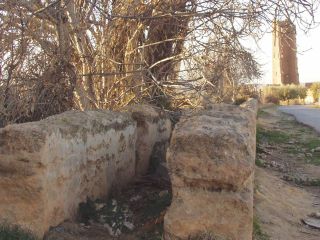 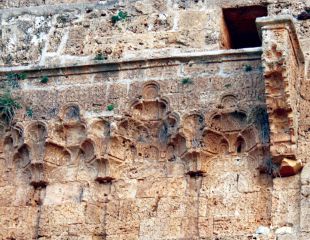 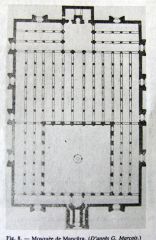 Sultan Abu Ya'qub established this military base in AH 698 / AD 1299 in order to lay siege to Tlemcen. He quickly built a palace, a mosque and barracks for the soldiers and garrison officials. Protected by strong fortifications, the site was soon referred to as al-Mahala al-Mansura (the victorious camp). The siege of Tlemcen diverted all commercial activities towards Mansura, which in turn expanded considerably. The Marinids abandoned Mansura following the assassination of Abu Ya'qub at the hands of a slave, and the site was partially destroyed by besiegers. In AH 735 H / AD 1335, a second siege was undertaken by Abu al-Hasan. Tlemcen capitulated and Mansura became, for a time, the official seat of the Marinid government in the central Maghreb. Important remains of the ramparts, the mosque and the prayer area still exist.
The ruins of Mansura's ramparts encompass a trapezoidal area of 101 hectares. The ramparts were built out of cobblestone and reached a height of 12 metres and a width of 1.5 metres at its base. It was flanked by 80 towers.
The mosque was built by Abu Ya'qub in AH 701 / AD 1302 and was modified, most notably in the decoration of the main gate, by Abu al-Hasan. All that remains are wall-surfaces, the outline of the mihrab and a section of the magnificent minaret, but it has been possible to reconstruct the layout of the mosque thanks to archaeological excavations. Columns made of onyx and capitals have been preserved in the Museum of Tlemcen and in Algiers' National Museum of Antiquities and Islamic Arts. The main entrance of the mosque, flanked on either side by three naves and a gallery that is parallel to the wall of the main entrance, lies at the foot of the minaret and leads into a square courtyard, each of its sides measuring 30 m.
The prayer hall was rectangular in shape (60 x 55 m). It was composed of 13 balatat (naves), which were perpendicular to the eight rows of columns that in turn were parallel to the mihrab wall. The mihrab was preceded by a dome and flanked by two doors that led into a room at the back. Only three façades of the minaret that was erected on a square base (10 m wide x 9.5 m deep) still stand, the fourth having crumbled. The minaret was hollow at the centre, and the balcony at the top was reached with the use of ramps.
The arch of the mosque's main gate reaches 2.5 m in height. Its frame is composed of successive blocks, with a rectangular border featuring inscriptions and two cornerstones decorated with arabesques. The arch rests on two onyx columns. A corbel held up by muqarnas (stalactite work), a reticulated panel, and a blind gallery of pointed arches and slim columns would have been found above.

Ruins of the adobe ramparts, flanked by 80 towers, surround a trapezoidal area of some 101 hectares. Of the mosque, only a few wall sections and part of the magnificent minaret remain. The entrance led to a square courtyard. The 13-nave prayer room was laid out in a rectangle and the mihrab was preceded by a cupola. The arch of the main entrance was supported by two onyx columns and was framed by successive blocks with inscriptions and arabesques.