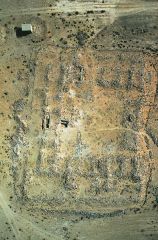 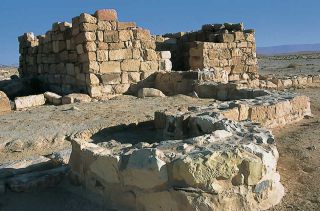 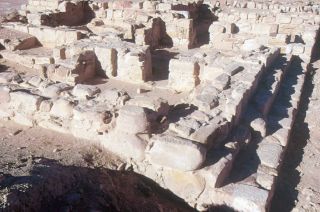 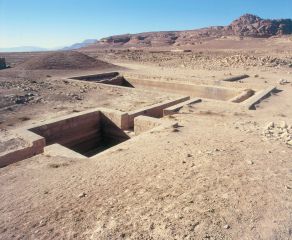 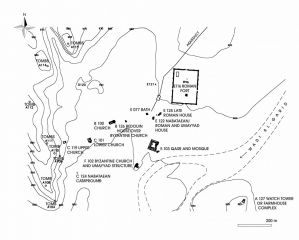 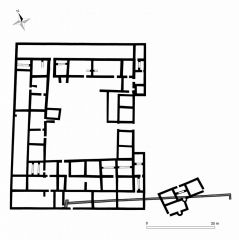 Humayma, ancient Auara, was one of the major settlements in the Hisma, Jordan's southern desert. Continuously occupied from about 90 BC until the early Islamic period, Humayma represents a region that has witnessed successive cultural phases: Nabataean, Roman, Byzantine and Islamic. Humayma is located 45 km to the south of Petra and 55 km to the north of Aqaba. The annual precipitation rate averages only 80 mm; Humayma is, therefore, a good example of how the ancient inhabitants managed to wrest a hard livelihood in this harsh desert environment.
Surveys and excavations at this multi-period site have identified numerous structures including Nabataean- and Roman-period houses, a large Roman fort (206 m x 146 m.), a late Roman bath, five Byzantine churches, an early Islamic palace (qasr) with a small extra-mural mosque, as well as two reservoirs and more than 50 rock-hewn and built cisterns, wadi barriers and a dam. An aqueduct 26.5 km long once brought water from three natural springs in Ras al-Naqab to an open reservoir at the northern edge of the site.
Founded by the Nabataean King Aretas III (87–52 BC), al-Humayma is situated on the main route from Petra to Aila on the Gulf of Aqaba; it must have prospered early on from the passage of caravans through the interior of the Nabataean Kingdom. With the construction of the Via Nova Trajana between AD 111–14, Auara became an important station on the great north-to-south highway, which linked Bosra in southern Syria and Aila.
Although al-Humayma does not figure in the accounts of the Arab-Muslim conquests, it is attested in the Arabic sources as the residence of members of the Abbasid family. In around AH 80 / AD 700 Ali, a grandson of 'Abbas, a paternal uncle of the prophet Muhammad, left the Hijaz with his family for Syria. He first settled at Udhruh near Petra, but soon purchased the village of Humayma and constructed there a monumental building (qasr) with a garden. From this strategic location, situated on the caravan and pilgrim routes, the Abbasids plotted the overthrow of the Umayyad dynasty which came to a successful end in AH 132 / AD 749–50.
The family left Humayma for Kufa in Iraq in AH 132 / AD 749. Among them were two of the first Abbasid Caliphs: Abu al-‘Abbas al-Saffah and Abu Ja'far al-Mansur, both of whom were born and reared at Humayma. Excavations have uncovered three buildings associated with the Abbasid family including the qasr and a small mosque.
The qasr, located at the eastern edge of the settlement, is a roughly rectangular building (61 m x 50 m) with up to six courses of masonry walls still intact. The principal entrance is located in a recess 21 m wide in the east perimeter wall. The entrance, set back from the eastern wall opens onto a vestibule which leads to a trapezoidal courtyard surrounded by up to three 'rings' of rooms representing phases of later expansion and additions. The perimeter walls lack both the round or semi-round buttresses and the distribution of rooms into self-contained residential units (bayts), both of which are characteristic of the so called Umayyad desert castles such as qasr al-Kharanah, al-Qastal and al-Mushatta. One room in the western wing on the axis of the principal entrance contained numerous fragments of carved ivory furniture and colourful frescoes with floral and geometric motifs, all dating to the first half of the AH 1st / AD 8th century. Ten metres to the southeast of the qasr is a small mosque with measurements ranging from 5.75 m to 5.60 m; the entrance to it is through a door in the north wall. The interior is divided into two equal parts by a transverse arch, and a concave niche (mihrab) projects from the qibla wall. To the southwest is another small mosque of a much later date.

Humayma, ancient Auara, was the largest settlement in the Hisma desert where annual rainfall averages only 80 mm. Survival in this harsh environment was possible due to a comprehensive hydraulic system, originally Nabataean. In around AH 80 /AD 700 Ali, a grandson of ‘Abbas, uncle of the prophet Muhammad, purchased the village and from their strategic location on the caravan and pilgrim route, the Abbasids plotted the overthrow of the Umayyads, which came to a successful end in 132 / 749–50. Excavations have uncovered the Abbasid family residence (qasr) and their small annexed mosque.

The monument was attested by the Arabic historians, al-Baladhuri and al-Bakri as the residence of members of the Abbasid family. Also during excavations three buildings, including the qasr associated with the Abbasid family and a small mosque, were uncovered and dated to the 1st / 8th century through the presence of associated ceramics. 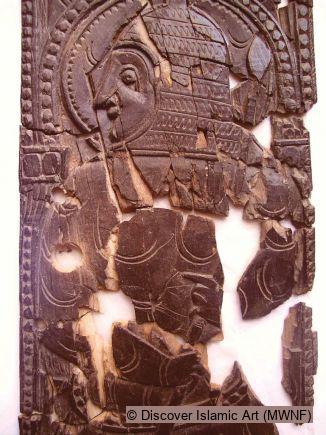 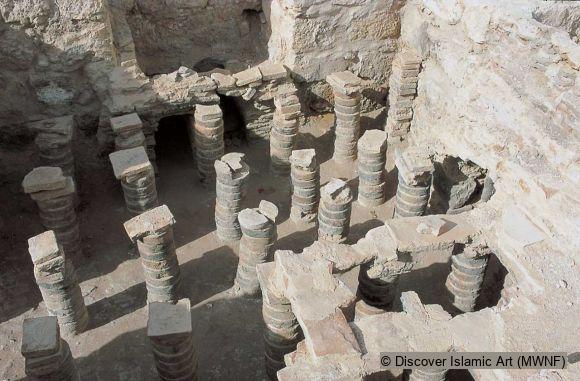