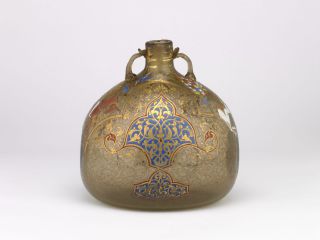 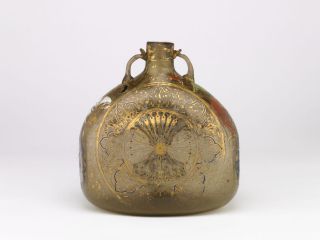 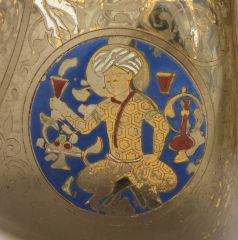 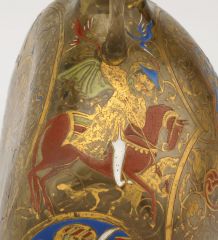 A free-blown, globular-shaped glass vessel with enamel decoration. One of the wider sides and the lower half of both narrower sides are flattened. The colours of the enamel are wide-ranging: red, white, blue, pale-green, yellow, pink, mauve, and greyish black. Two applied handles sit on either side of the cylindrical neck. An eleven-pointed rosette within an eight-lobed flower containing vegetal scrolls decorates the flattened side. Decorating the curved side is a four-sided lobed motif, with a geometric shape filled-in with arabesques and surrounded by scrolls, terminating in human, animal, or bird heads. On the left of the curved side is a horseman in the act of killing an animal with a spear, he has a beard and a halo around his head and wears a conical hat with ribbons. Below this figure is a medallion with a female harp player, wearing a veil and a long tunic. On the other narrow side is a horseman under a tree killing a lion with a javelin; birds are flying overhead. He has a halo and wears a long coat and boots. In the circular medallion below him is a man sitting cross-legged, with a beaker in one hand, drinking. His tunic has decorative tiraz bands on the sleeves.
The two horsemen recall those found in Christian iconography, whereas the figures in the medallions are typical of figures depicted in Islamic art. The mixture of motifs suggests the patron was either a Muslim who was familiar with Christian imagery or a Christian who appreciated the work of Muslim craftsmen. The shape of this vessel recalls leather flasks or unglazed ceramic pilgrim bottles, rather than other glass and metal objects. Although made of glass, this flask may have been carried on journeys or pilgrimages in a leather container. It was certainly a luxury object, perhaps made specifically as a gift.

This enamelled glass pilgrim bottle is an interesting example of the crossover of Christian and Islamic cultures. Two of the figures decorating the vessel derive from Christian iconography of St George and the dragon, whereas the musician and drinker are found in Islamic art.

Bequeathed to the British Museum by Felix Slade in 1869.

The technique and decoration are close to other glass objects produced in the Mamluk domains of Egypt and Syria. 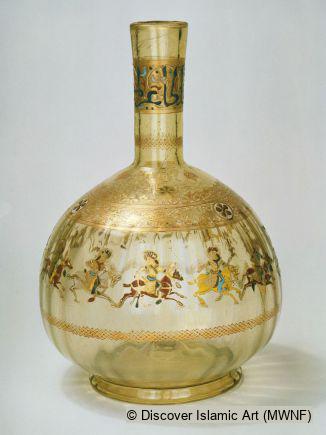 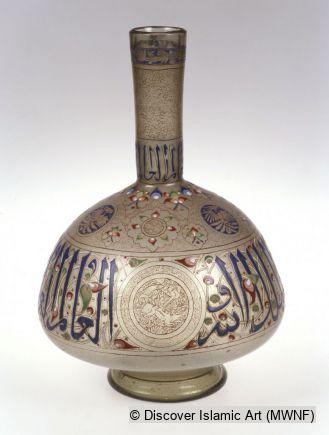 Pilgrimage | The Holy Land of Three Faiths Al-Franj: the Crusaders in the Levant | Pilgrimage to the Holy Land