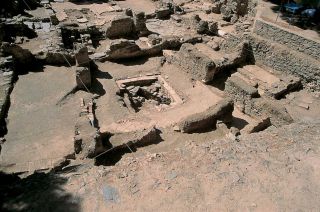 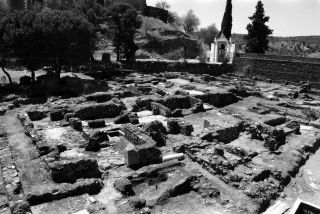 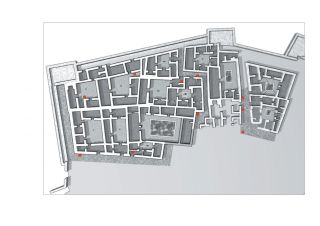 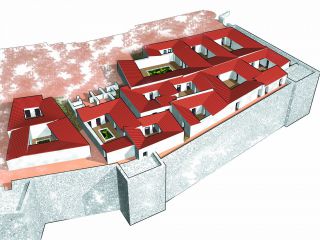 The Islamic quarter was built at the end of AH 6th century / AD 12th century, on a platform built in the Byzantine period.
Since the beginning of the excavations in 1978, the ancient fortress of Mértola has provided an enormous amount of materials from the Islamic period. At the same time, architectural remains have been unearthed which date from the Roman period (AD 1st century) to the period of the reconquest of the town (AH 7th / AD 13th century). The most interesting part of this is the urban area, of which the remains of some ten dwellings are visible today. The houses, repeating architectural styles common to the Mediterranean urban world, are organised around a central open courtyard and comprise a set of rooms with clearly defined functions (living rooms, bedrooms, kitchens and latrines, etc.). In the complex superimposition of structures which always results from urban archaeological interventions, it is possible to read with clarity the remains of streets, drainage systems and paving which bear witness to the final occupation of the Islamic citadel.
It is an urban grouping of around 4,000 square metres, comprising some 30 dwellings. Up to the present, fragments of 15 houses have been uncovered, and excavation of nine of them has been completed, clearly showing their layout. Each of these houses is arranged around a central open courtyard, a 'room' which gives a clear indication of the spatial conception and identifies the cultural habits of the inhabitants. In spite of the evident differences in economic status between the residents of some of these houses (visible in the larger or smaller areas occupied by the dwellings and in the level of refinement found in some of them, in comparison with simpler and more economical solutions used in others), their schemes of functional organisation do not differ a great deal.
The historical and archaeological research in progress, as well as having produced a set of basic data for the study of the urban organisation of the area or of the architecture of the dwellings, has also provided information on which to base a study of the daily lives of the population of Mértola in the Islamic period. Evidence from work tools, musical instruments, pieces from games, and kitchen or dining utensils revealing eating practices is gradually allowing us to piece together the immense jigsaw of the day-to-day lives of the inhabitants of this citadel eight centuries ago.

The Islamic quarter was built in the late AH 6th / AD 12th century on a Byzantine site. It covers an area of 4,000 square metres and contains some 30 houses. Archaeological excavations have identified some of these dwellings: arranged around a central, open courtyard, they include a number of clearly functional divisions (living rooms, bedrooms, kitchens, latrines, etc.). There are also clear vestiges of roads and sanitation systems that are a record of the last Islamic occupation.

The Islamic quarter of Mértola was dated by means of stylistic analyses (comparison with residential complexes of the same period in Al-Andalus: Pechina, Saltés, Ciesa, etc). This dating has been confirmed by archaeological stratigraphy, which has brought to light, at the level of the abandonment of the quarter, an abundance of ceramics from the Almohad period.